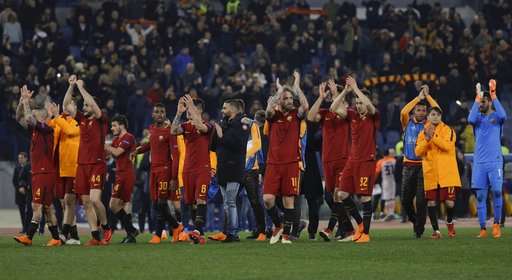 Roma have advanced to the UEFA Champions League quarterfinals after defeating Shakhtar Donetsk 2-2 on aggregate, qualifying on the away-goal rule.

After losing the first leg in Ukraine, 2-1, Roma returned to Italy needing a result. A 52nd-minute goal from Edin Dzeko was enough to propel the Giallorossi to the next round of the Champions League.

“My team played with focus tonight, perhaps without as much quality in the final third, but we knew that sooner or later they would make a mistake and we’d pounce on it,” head coach Eusebio Di Francesco told Mediaset Premium after the match.

“I didn’t want to leave because of nights like this. We managed to do something Roma hadn’t in 10 years, so going forward to play against the best makes us all very proud,” said striker Edin Dzeko. “I am not thinking about who we face because they are all strong and wherever we play, it’ll be a packed stadium and great atmosphere.”
Roma will find out their quarterfinal opponent on Friday at the UEFA draw in Nyon, Switzerland.
Share FacebookTwitterPinterestEmail
previous