A Criticism of Maurizio Sarri 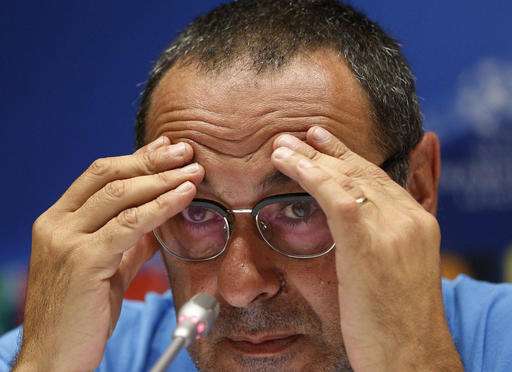 Maurizio Sarri has undoubtedly brought a remarkable new style of football to the city of Napoli. Having joined in the summer of 2015 from Empoli, the former banker quickly revolutionized the way Società Sportiva Calcio Napoli play the beautiful game of football.

Implementing a new approach based on attacking football by building up play from the back and emphasizing one-two touches in the final third, the team has produced electrifying goal-reel highlights. Second and third place finishes have propped Napoli as Scudetto contenders but still unable to break Juventus’ stronghold on Serie A. Sarri has rightly received much praise for the work he has done, including from his own boss Aurelio De Laurentiis who has said, “Maurizio can stay at Napoli for life!”

While I am an ardent admirer of Sarri and his football, I think it’s time to start raising some criticisms about his methods.

Napoli were crowned winter champions of Serie A for the second time in three seasons, again with just a two-point lead over Juventus. But Sarri’s side lost their lead in the 2015-16 season, finishing nine points behind the Old Lady. Napoli have now lost their lead again this time around with Max Allegri’s side now with a four-point advantage with just 10 matches remaining. The two clubs will meet in Turin on the weekend of April 21-22. Even if Napoli manages to accomplish something they haven’t since 2009 — earn three points in Turin against Juventus — they will still need help from other results to finally lift the Scudetto again.

Napoli did a fabulous job in reinvesting the €90 million earned from Gonzalo Higuain’s sale. Striker Arkadiusz Milik was brought in to replace Higuain’s goal scoring prowess, while Amadou Diawara, Piotr Zielinski, Marko Rog, and Lorenzo Tonelli were all brought in to greatly increase the depth in the midfield and defense. These moves improved the balance of the squad but I’m afraid Sarri hasn’t used this new squad’s depth to his advantage. Eight players have registered over 2,000 minutes in Serie A, the second-most of any team. In contrast, only one Juventus player has over 2,000 league minutes, ironically, ex-Napoli star Gonzalo Higuain.

Sarri consistently starts with the same lineup, Reina; Hysaj, Albiol, Koulibaly, Ghoulam; Allan, Jorginho, Hamsik; Callejon, Mertens, Insigne. Mario Rui has been inserted after Faouzi Ghoulam tore his ACL back on November 1. Following his steady starting lineup are Sarri’s predictable substitutions. Zielinski will inevitably be brought on for captain Hamsik around the 65-70 minute mark, followed by Milik on for Mertens, granted the Pole is healthy. Lastly, either Diawara or Rog will come on for either Allan or Jorginho in the midfield. Unfortunately, Sarri’s in-game adaptability has quite simply been poor. Very rarely, if ever, does he make a formation change or modify the focal point of his teams attack mid-match. This is certainly an area where Sarri needs to improve to bring home a long-awaited Scudetto to Napoli.

Sarri’s greatest flaw is arguably Massimiliano Allegri’s strongest attribute. The Juventus head coach does a remarkable job of making adjustments both in-game and long-term over the course of an entire season. Whether it is a tweak in formation or personnel change, Allegri’s adaptability is exceptional. Hopefully, Sarri can take notes from his adversary in hopes of being more flexible from the sideline while enjoying his cigarettes.