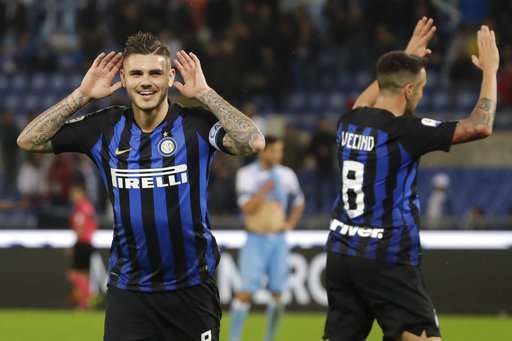 Inter Milan made it six league wins in a row to rise into the top two, beating Lazio 3-0 in Rome on Monday night. This was a repeat of the dramatic game from the final day of last season, where Inter snatched the final Champions League spot from the grasp of their opponents. The hosts were seeking revenge, instead, they were dealt a humbling defeat.

Luciano Spalletti made a couple of surprise selections, naming Joao Mario and Miranda in his starting line-up ahead of Borja Valero and Stefan de Vrij, who could only watch on against the side that he controversially left in the summer. In a lively start, both sides created promising openings. Mauro Icardi was inches away from connecting with an inviting cross from Ivan Perisic, whilst Ciro Immobile was played through on goal, but appeared unusually hesitant in front of goal, allowing Miranda to get back and force him to shoot wide.

The first goal was always going to be crucial, and it came from Inter’s captain, Mauro Icardi. Matias Vecino saw his effort blocked, with the ball dropping perfectly into the stride of Icardi, who could hardly miss from inside the six-yard box. The lead gave Inter confidence, and they finished the half on the front foot. Vecino was twice denied by sharp stops from Thomas Strakosha, with the second goal appearing inevitable. It duly arrived just before halftime. Lazio failed to clear a corner, with the ball dropping to Marcelo Brozovic, who drilled his shot home from the edge of the area.

It seemed a tough ask for Lazio to turn things around, especially as they were regularly being exposed on the counter-attack by a ruthless Inter front line. Indeed, that is how the game-clinching third came about. Substitute Valero delivered a perfectly weighted pass for Icardi, and after cutting back inside, the Argentine made no mistake on his weaker left foot. That is now five goals in his last three league starts for Icardi. Lazio rallied late on, Ciro Immobile forcing Samir Handanovic into a fine block at his near post to preserve his clean sheet.

It has been a very inconsistent start to the season for Lazio, who have lost four of their opening ten games, whilst winning the other six. Meanwhile, Inter are now level on points with Napoli, topping their rivals due to a superior goal difference. They sit six points behind Juventus. Could Inter make a challenge for the title this year? Perhaps that is a step too far, but they are gathering momentum by the week.

Napoli left it late to snatch a point against rivals Roma in an entertaining 1-1 draw on Sunday evening. Roma went ahead early on through Stephan El Shaarawy and looked to be on course for an unexpected victory. However, having been on the wrong end of a late goal in midweek against PSG, Napoli hit back in the final minute thanks to Dries Mertens. Their unbeaten start to the season at home remains intact for now.

Juventus opened up a six-point gap at the top of the league once more, coming from behind to beat Empoli 2-1. It was Empoli who took a shock lead, given to them by Francesco Caputo. The champions found their rhythm after the break though, levelling matters with a Cristiano Ronaldo penalty, before the same player scored a trademark long-range strike to secure the win.

AC Milan eased some of the pressure on Gennaro Gattuso, as they saw off Sampdoria 3-2 at the San Siro. Patrick Cutrone put Milan ahead, only to see Sampdoria turn the game on its head through Riccardo Saponara and Fabio Quagliarella. Cutrone then turned provider, setting up Gonzalo Higuain to level proceedings, and Suso netted the winner with a powerful strike from the edge of the box. Milan have jumped to 5th place, with just three points separating themselves and 15th ahead of their rearranged fixture with Genoa on Wednesday.

Atalanta continued their recent resurgence, dispatching Parma 3-0. All of the goals came in the second half, as Jose Luis Palomino and Gianluca Mancini added to Riccardo Gagliolo’s own goal to seal a convincing win. Having scored five goals in their previous seven matches, Atalanta have now produced eight in their last two games. Crisis, what crisis?

Frosinone made it tenth time luck, as they earned their first win of the season in a 3-0 triumph over SPAL. Goals from Raman Chibsah, Camillo Ciano and Andrea Pinamonti moved the newly-promoted club onto five points, just four points from safety.

Sassuolo and Bologna were involved in a highly-entertaining 2-2 draw in Sunday’s lunchtime kick-off. Rodrigo Palacio and Ibrahima Mbaye twice put Bologna in front, but they were pegged back on both occasions with strikes from Marlon and Kevin-Prince Boateng. Sassuolo remains just inside the top half, whilst Bologna are a place above the bottom three.

Not to be outdone, Genoa and Udinese also shared four goals, in a game that saw a red card as well. Udinese’s Kevin Lasagna and Rodrigo De Paul responded to goals from Romulo and Cristian Romero, with the latter given his marching orders inside the final twenty minutes.

Torino and Fiorentina could not be split on Saturday evening, playing out a 1-1 stalemate. Both goals arrived in the first fifteen minutes, with Marco Benassi giving Fiorentina the advantage, which was wiped out just over ten minutes later due to an Alban Lafont own goal.

Gian Piero Ventura’s Chievo continue to toil, losing to Cagliari 2-1 this weekend. Leonardo Pavoletti and Lucas Castro opened up a commanding lead for the Sardinian club before Mariusz Stepinski offered the bottom side hope in the closing stages. Yet it was not enough, meaning Ventura has started his reign with consecutive defeats, leaving his side ten points from safety.