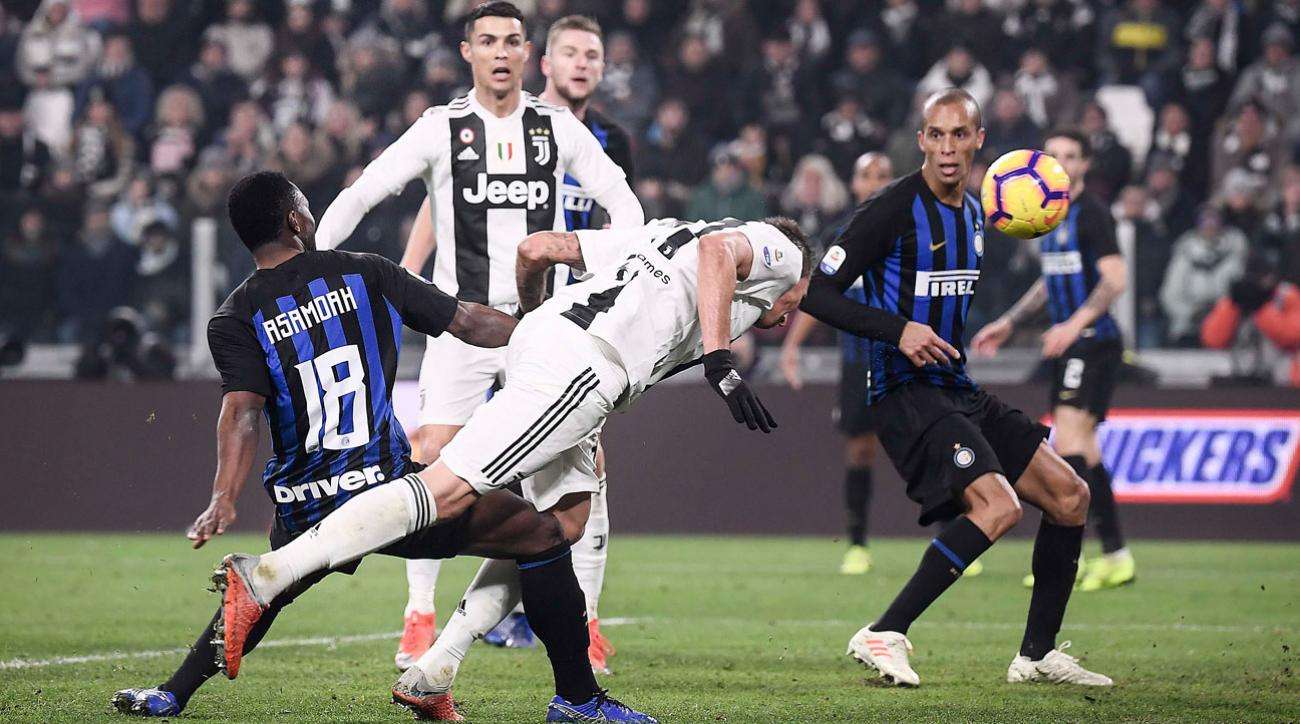 Mario Mandzukic headed the only goal of the game as Juventus edged out Inter Milan in the Derby d’Italia on Friday night in Turin. The win was the fourteenth in fifteen games for Juventus, who look firmly on course for an eighth consecutive Serie A title.

Coming into the game, Juventus already had an eleven point cushion over Inter. Yet this was Inter’s chance to make a statement as they try to get back towards the summit of Italian football.

After a cautious opening from both sides, it was the visitors who fashioned the best chance of the half. Roberto Gagliardini, surprisingly selected over Matias Vecino, waltzed into the box unchallenged, but his scuffed finish came back off the post and into the hands of Wojciech Szczesny. This seemed to spark Juventus into life, as they twice went close in the latter stages of the half, Rodrigo Bentancur seeing his goalbound effort blocked, whilst Samir Handanovic had to be alert to turn away Giorgio Chiellini’s near post header.

An encouraging end to the half and the second half started brightly as well. Matteo Politano pounced on a Blaise Matuidi mistake, only to see his shot smothered by Leonardo Bonucci. Inter were having their moments, but Juventus started to crank up the pressure as the half progressed, and in the 66th minute, the breakthrough arrived. Joao Cancelo delivered a measured cross to the back post, Mandzukic attacked it, overpowering Kwadwo Asamoah to nod home from close range.

With Juventus having only conceded eight times this season, it was always going to be tough for Inter to get back into the contest. The task proved beyond them, and Juventus’s evening was capped off by the return of Emre Can, who made a late substitute appearance after a recent thyroid problem.

Juventus maintain their eight-point lead at the top of the league, whilst Inter remain in third but have now slipped six points behind Napoli.

A scarcely believable final thirty minutes saw Sassuolo and Fiorentina play out a 3-3 draw on Sunday lunchtime. After a goalless opening hour, Sassuolo opened up a two-goal lead through Alfred Duncan and Khouma Babacar. Giovanni Simeone halved the deficit, only to see Sassuolo make it 3-1 when Stefano Sensi netted ten minutes from time. Fiorentina’s hopes were given a boost as Filip Duricic was sent off for Sassuolo, and Marco Benassi made it 3-2. Nikola Milenkovic’s injury-time red card looked to have ended Fiorentina’s chances, only for Kevin Mirallas to pop up and score a dramatic equaliser. That is now six draws in seven for Stefano Pioli’s men.

Roma suffered a late capitulation, throwing away a two-goal advantage to draw 2-2 in Cagliari. Goals from Bryan Cristante and Aleksandar Kolarov looked to have handed Roma a routine win, but the hosts fought back admirably. Artur Ionita pulled one back before Marco Sau completed the comeback just moments after Cagliari had been reduced to nine men, Darijo Srna and Luca Ceppitelli both shown red cards in added time. These are worrying times for Roma, who have not kept a clean sheet in the league since early October.

Lazio and Sampdoria served up their own thrilling finale on Saturday night, the 2-2 scoreline only telling half the story. Sampdoria went ahead thanks to their captain Fabio Quagliarella, but were put under enormous pressure in the second half, and looked to have wilted when Francesco Acerbi levelled, and then Bartosz Bereszynski was given his marching orders. Lazio appeared to have snatched all three points when Ciro Immobile converted a controversial penalty given against Joachim Andersen. Having not won in a month though, Lazio faltered once more, substitute Riccardo Saponara volleying home a 99th-minute equaliser.

Napoli strengthened their grip on second place, thumping Frosinone 4-0 on Saturday afternoon. Adam Ounas produced the pick of the goals, whilst Piotr Zielinski and an Arkadiusz Milik brace secured the points. Carlo Ancelotti’s side can now look forward to their Champions League showdown with Liverpool on Tuesday night, whereas Frosinone remain down in 19th.

Genoa overcame an early sending-off to register a 1-1 draw with SPAL in Cesare Prandelli’s first game in charge. Already onto their third manager of the season, Genoa got off to a nightmare start when Domenico Criscito was shown a red card in the 11th minute. Andrea Petagna made the most of SPAL’s man advantage by scoring a few minutes later, but Krzysztof Piatek’s penalty earned Prandelli’s side a point.

There was another red card in Parma, as the hosts battled to a 1-1 draw with Chievo. Still in search of their opening victory of the campaign, Chievo must have felt that this could be their day when Mariusz Stepinski scored the opener. However, a fine Bruno Alves free-kick made it 1-1, and Chievo were forced to hang on in the closing stages as they were reduced to ten men, Fabio Depaoli the guilty party. A fourth draw on the trot for Chievo.

Duvan Zapata scored a hat-trick to help Atalanta to a 3-1 win over Udinese. His first goal arrived inside the opening minute but was swiftly cancelled out by Kevin Lasagna’s strike. Two more goals from the Colombian striker after the break ensured that Atalanta bounced back from consecutive defeats, lifting them into the top half of the table.

The pressure is continuing to mount on Filippo Inzaghi, who watched his Bologna side slump to a 2-1 defeat against Empoli. Antonino La Gumina’s late winner leaves Bologna two points from safety, whilst Empoli have moved five points clear of the relegation zone.

AC Milan and Torino were involved in the sixth draw of the Serie A weekend as neither side were able to break the deadlock at the San Siro. The result sees both teams remain where they were, with Milan a point clear of Lazio in 4th, and Torino two places and four points outside the Champions League spots.

Can a resurgent Inter stop the Juventus machine?