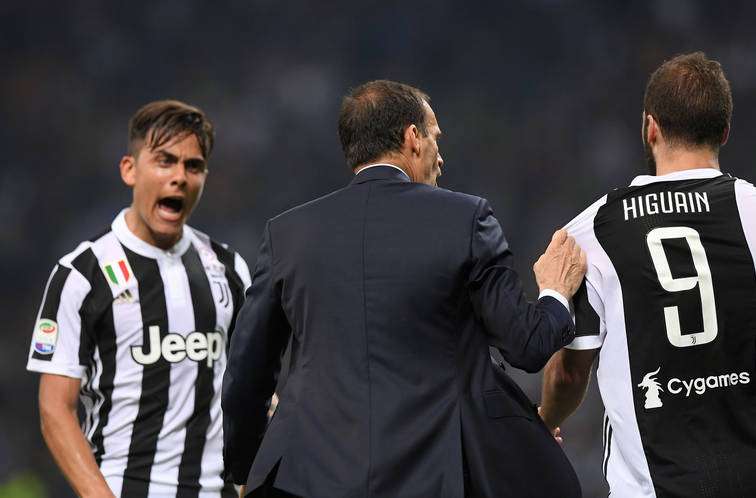 It was a game that had absolutely everything. The Derby d’Italia between Inter and Juventus on Saturday night looked for long spells like it would ruin Juve’s Scudetto advantage over Napoli but in the end, it made their grip on the title firmer. It was such an amazing game that words can hardly do it justice.

Juve took an early lead when Douglas Costa received a cross from Juan Cuadrado and powered a shot past Samir Handanovic. Just a few minutes later, Matias Vecino was shown a straight red card for a tackle on Mario Mandzukic. After fifteen minutes, Inter were both a goal and a man behind. It looked like it would be an easy evening for Juventus.

But Juve dropped the intensity and allowed Inter to get back in it. And when Inter got that chance they really rallied and made it difficult for Juve despite their disadvantage. Mauro Icardi equalized early in the second half from a Joao Cancelo free-kick to make San Siro go wild. When Ivan Perisic then went past Cuadrado on the left and squared the ball in front of goal it was turned into his own net by Andrea Barzagli. 2-1 to the ten men Inter. The clock then ticked down fast for Juve who struggled to create any clear chances. With three minutes remaining they were still down a goal which opened the door for Napoli to leapfrog them the following night. But Allegri’s attacking changes, bringing on Federico Bernardeschi and most importantly Paulo Dybala would pay off.

First, in the 87th minute, Dybala played the ball into the run of Cuadrado who managed to score from almost no angle thanks to a deflection off Milan Skriniar. A minute after the celebrations ended, Dybala’s free-kick reached Gonzalo Higuain who headed in the winner. Two goals in two minutes at the end to win the game, it just felt so Juve.

The win created a four-point gap to Napoli, and that gap remains after they lost in Florence on Sunday. Surely these results make Juve’s grip on the Scudetto unbreakable. They can afford to lose against Roma if they beat Bologna and Hellas at home. This late turnaround in Milan will likely be remembered as the night Juve won a record-breaking seventh straight Scudetto.

Napoli must have been slightly demoralized after seeing Juve’s turnaround, but they will be crushed now after being demolished by Fiorentina on Sunday. Granted, Kalidou Koulibaly’s red card after eight minutes ruined their game plan, but as Inter showed the previous day you can still produce a strong performance. Sarri opted to bring off Jorginho to get another centre-back onto the pitch with Lorenzo Tonelli coming on. In hindsight, this sub restricted Napoli’s ability to keep the ball and it would probably have been smarter to bring off Callejon to still keep three midfielders so Napoli could have controlled possession. As it turned out, Fiorentina dominated the ball, and Giovanni Simeone scored a hat-trick to probably clinch the title for Fiorentina’s arch-rivals, Juventus. Heartbreaking for Napoli after their superb win last week in Turin, but they have still over-performed massively and should be commended for pushing Juve this far given the gulf in resources.

Roma and Lazio strengthened their hold on 3rd and 4th after both won their games while Inter lost. This means they’re both four points ahead of the Nerazzurri with three games to go. Roma beat Chievo 4-1 at the Olimpico with goals from Schick, Dzeko (2) and El Shaarawy while Lazio won in Turin against Torino thanks to Sergej Milinkovic-Savic header. Roberto Inglese scored Chievo’s consolation goal. The other results now leave Chievo in the relegation zone which has been virtually unheard of in their ten-season run in the Serie A since promotion in 2008. Their form makes the future even darker, they haven’t won in six, while both SPAL and Crotone are in really good form. Going on form it, therefore, the final relegation spot looks like it will go down between Chievo, Udinese, and Cagliari.

That is because Udinese blew a win at Benevento in the final minutes after coming from behind to lead 3-2. Udine took the lead when Silvan Widmer headed in Andrija Balic’ free-kick, but Benevento equalized through the excellent Nicolas Viola. Benevento were then down to ten men but took the lead courtesy of Massimo Coda’s penalty. Two goals from Kevin Lasagna turned the game around to give the visitors the lead but Bacary Sagna made it 3-3 from a corner. Tough to take for Udinese, but at least new coach Igor Tudor got a point to break the run of 11 straight losses.

Cagliari were soundly beaten in Genoa after Sampdoria went 3-0 up in the first half thanks to goals from Praet, Quagliarella, and Kownacki. Leonardo Pavoletti pulled one back but Gaston Ramirez made it 4-1 at the end. Cagliari are in real danger, two points above the drop zone. Fun fact: Kownacki’s 3-0 strike in first-half stoppage time went in at 48.29. Pavoletti’s strike to make it 3-1 early in the second half went in at 48.21.

Milan beat Bologna thanks to goals from Hakan Calhanoglu and Giacomo Bonaventura to keep the pressure up at Atalanta in the race for sixth place and a Europa League-spot. Sebastien De Maio pulled one back for the Rossoblu but it proved too little too late.

But it might still prove in vain because Atalanta’s terrific form continued with a 3-1 win against Genoa which in reality could have been 5 or even 6-0. Bryan Cristante was once again fantastic and assisted Musa Barrow’s opener before bursting into the box and finishing Alejandro Gomez’s scooped pass with a half-volley. Josip Ilicic came on and scored a beauty to make it three, but Miguel Veloso pulled one back for Genoa with a splendid free-kick.

Crotone are in great form and leaped into 15th with their 4-1 win against Sassuolo to open up a three-point gap over Chievo in 18th. Braces from Marcello Trotta and Simy made Domenico Berardi’s penalty redundant. It seems another great escape are on the cards for the Pitagorici.

SPAL continue to impress and their 3-1 win at Hellas Verona basically confirmed Hellas’ relegation. They are seven points away from safety with three games to go. SPAL, on the other hand, are 17th, but just a point ahead of Chievo. Their form is brilliant though, just one loss in their last twelve. If they can manage two more wins they should be safe. Hellas’ goal was scored by Mattia Valoti but SPAL turned it around thanks to an own-goal from Fares, a close-range strike from Felipe and a stoppage-time clincher from Jasmin Kurtic.

The forward has come up with some important goals in Crotone’s quest for survival and he scored another two against Sassuolo to lift Crotone, temporarily at least, away from trouble.

It’s hard to look past Gasperini because his work in Bergamo over the last two seasons might just be the most impressive work of any coach in Europe in that period. After finishing fourth last season, Atalanta are now sixth and on a great run. Europe beckons again if they can keep Milan behind them in a testing run in. It’s still a fantastic achievement.

As you’ve gathered throughout this season, I love free-kicks. And Veloso’s was stunning, so he is my pick this week.