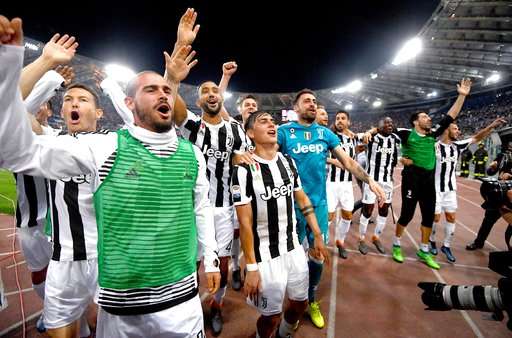 On a weekend when Juventus clinched a record-breaking seventh consecutive Scudetto and a fourth straight league and cup double for Massimiliano Allegri, it says something that the relegation still created more drama and entertainment. The five clubs involved, Crotone, SPAL, Cagliari, Chievo and Udinese all led their games at one point. The balance of power swung between the sides too with each of Chievo, SPAL and finally Crotone spending time in 18th. The drama will now move into the final day with all clubs risking the threat of relegation. Let’s go through each clash from the weekend.

We start in the south where Crotone hosted Lazio. The Pitagorici needed a win to climb away slightly from the absolute bottom with Napoli away on the final day looming. Lazio needed a win to clinch fourth spot ahead of Inter with their clash on Sunday. Senad Lulic gave Lazio the lead but Crotone, cheered on by an extremely vocal Curva Sud, turned the game around with goals from Simy and Federico Ceccherini. Lazio, without Ciro Immobile and Luis Alberto, lacked creativity and quality in the final third but Sergej Milinkovic-Savic stepped up to earn Simone Inzaghi’s men a draw. The 2-2 result didn’t help either team as Crotone dropped into 18th and need to beat Napoli on the final day to retain hope of survival while Lazio needs to avoid defeat at home to Inter on Sunday to make a return to the Champions League for the first time since 2007.

Inter had the chance to put pressure on Lazio but lost at home to Sassuolo the previous day. The unorthodox front two of Domenico Berardi and Matteo Politano scoring a goal each to give Sassuolo a two-goal cushion. Berardi’s strike, in particular, was superb. Rafinha pulled one back for Inter but Mauro Icardi couldn’t score on the night despite several good chances. Inter now have to win in Rome to clinch a return to the Champions League. If they win they join Lazio on 72 points but have a better head-to-head record than the Biancocelesti.

In the race for sixth, we had a direct battle between Atalanta and Milan in Bergamo. The game ended 1-1 after a late equalizer by the home side’s Andrea Masiello. Both will very likely play in the Europa League next season but the race to finish sixth goes into the final day.

Roma have secured third spot and Champions League qualification again to try and repeat their strong run this term. They’re 0-0 draw against Juventus had greater importance for the visiting side as Allegri’s men clinched their seventh straight Scudetto four days after winning their fourth straight Coppa Italia. Despite Napoli’s strong challenge (they’ve broken their points record with 88 so far and can reach 91), Juventus managed to emerge with another Scudetto. It’s a testament to the strength of the squad and the quality of their coach.

Adem Ljajic made two assists last week to ruin Napoli’s last chance at the Scudetto and this week the Serbian made two “second-assists” which led to goals from Andrea Belotti and Lorenzo De Silvestri to turn a 1-0 deficit at home to SPAL to a win. The win didn’t mean much for Toro, but SPAL would have practically been safe if they had held on but now go into the last round needing a result at home to Sampdoria to stay above Crotone.

Chievo also came from behind and their win could be what keeps them up. New coach Lorenzo D’Anna has now overseen two straight wins and has probably kept Chievo up. Bologna had taken the lead through Simone Verdi who now has 10 goals and 10 assists for the season. A splendid goal from Emanuele Giaccherini and a winner from Roberto Inglese gave the visiting Chievo a vital win. They are two points clear of Crotone in 18th who go to Napoli on the last day. It should be enough.

Antonin Barak scored one of Udinese’s most important goals in the last decade when he grabbed the only goal of the game at Hellas Verona. The goal brought Udinese away from the immediate danger zone and they will be fine as long as Crotone don’t beat Napoli. It was vital for Igor Tudor’s men to get that result following their dismal showing against Inter last week.

Cagliari rallied in Florence as both clubs celebrated the memory of their former player Davide Astori. Leonardo Pavoletti headed home from close range to bring Cagliari above both SPAL and Crotone. Cagliari then held on, buoyed by a brilliant battling performance from Nicolò Barella in midfield, and secured a possibly life-saving win for the Sardinians. Fiorentina lost their chance on European football but have still done reasonably well in Stefano Pioli’s first season in charge.

Benevento have been relegated for quite some time but nobody seems to have told Cheick Diabate who continues to score goals, his eighth in only eleven games, and the striker scored the only goal of the game at home to Genoa. It’s often been fun watching Benevento, especially since Roberto De Zerbi took charge, but their second half of the season form couldn’t make up for the horrendous autumn.

Napoli won at Sampdoria thanks to goals from Arek Milik and Raul Albiol in a game which was interesting given the rumours Marco Giampaolo might succeed Maurizio Sarri should he leave the club. As you know, Giampaolo succeeded Sarri at Empoli largely due to Sarri’s recommendation and the two tacticians are good friends. Napoli broke their points record with the win and could reach 91 points with a win on the final day. That could make them the first team ever not to win the Scudetto despite gaining 90+ points. It’s been a remarkable season for the Partenopei but they will feel they lost the title in the Fiorentina and Torino games when they really had the chance to push Juve all the way.

Ljajic has had a remarkable spring and followed up two assists last week by having two “second-assists” this weekend as Torino came from behind to beat SPAL. The Serbian magician normally weaves his magic way too inconsistently, but this spring has been phenomenal for the creator. In this form, he’s one of Italy’s best players.

First, he clinched a fourth straight Coppa Italia. Then the league title was confirmed with the draw at Roma. In four seasons at Juve, Allegri has now won the Coppa and Scudetto double in each season. It’s remarkable and an unprecedented period of success for any club in Europe. Doing it despite the strong challenge from Napoli says something about Allegri’s capacity to keep his squad hungry for more. Complimenti, mister.

Almost a copy of Francesco Totti’s classic stunning left-footed volley at Sampdoria, Giaccherini stepped up when Chievo REALLY needed him too. He had a better angle than Totti, but his volley crashed in off the crossbar to make it even more spectacular. Given its importance and beauty, it might be the goal of the season. Enjoy: https://www.youtube.com/watch?v=CjTbGGce2QI