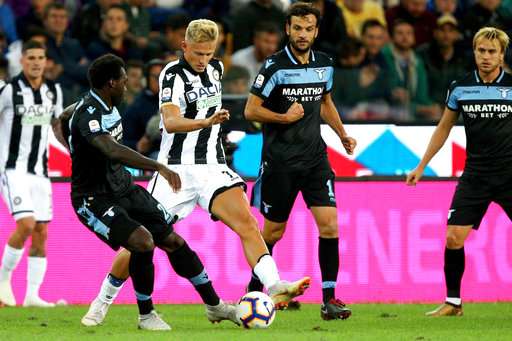 Udinese entered this game off the back of a solid start to the campaign, having lost just one of their opening five fixtures. The hosts only secured their Serie A future last year on the final day after a late-season collapse, but have already beaten Sampdoria and Chievo to give their fans hope that another relegation battle does not lie ahead. Meanwhile, Lazio were searching for their fourth straight win, having opened the season with consecutive losses against Napoli and Juventus. With the Rome derby taking centre stage on Saturday afternoon, Simone Inzaghi opted to tinker with his side, resting Sergej Milinkovic-Savic, Lucas Leiva and Ciro Immobile whilst handing a first league start to attacking midfielder, Joaquin Correa.

Neither team appeared able to settle in a tight first half. The game lacked fluency, as moves broke down far too easily. Defences were clearly on top, with the two sides only able to create one chance each before the break.

Udinese’s moment arrived first, Rodrigo De Paul seeing his free-kick from the edge of the area tipped over by the sprawling Thomas Strakosha. Lazio responded to this by creating an even better chance; Luis Alberto finding himself unmarked at the near post, but his feeble headed effort drifted well wide of goal. The classy Spaniard is not known for his heading ability, which was evident here as he passed up a clear opening for the visitors.

Things could only improve after the break. Ten minutes after the interval, Inzaghi had seen enough and introduced Immobile off the bench to replace the ineffective Felipe Caicedo. Instantly, Lazio posed more of an attacking threat, and shortly after the hour, they were in front. Luis Alberto’s free-kick was only parried away by Simone Scuffet, leaving Francesco Acerbi to hit home from close range. A soft goal to concede, but a crucial moment nonetheless, as Lazio began to take control of proceedings from this point, punctuating their dominance with a second goal in the 66th minute. This time it was a superb solo strike, as Correa weaved into the box, outmuscled the Udinese defence before slotting the ball into the bottom corner. His first goal for the club, and one to remember for the former Sevilla winger.

It looked a foregone conclusion that Lazio were heading towards another victory, but Udinese were not completely discouraged yet, giving themselves a lifeline with ten minutes to go. A long ball into the box was acrobatically turned towards goal by centre back, Bram Nuytinck, and it found the back of the net via the head of the unfortunate Milan Badelj. As the minutes ticked down, Udinese fashioned one final opportunity. Lukasz Teodorczyk beat his man to the ball at the near post, but could only direct his volley just wide of the left hand upright. A stirring fightback from Udinese fell short, as Lazio clung on to claim all three points.

Last seasons top three could hardly have asked for a simpler night’s work than that which they received on Wednesday. Juventus entertained Bologna, and raced into an early two-goal lead; Paulo Dybala and Blaise Matuidi the scorers. From then on it was plain sailing for the champions, who were able to rest players ahead of Saturday’s showdown with Napoli, whilst also giving a rare start to veteran defender Andrea Barzagli.

Napoli were hardly troubled either as they took on in-form Parma. An early goal from Lorenzo Insigne set the tone, with Arkadiusz Milik added a second-half brace to round off a comfortable 3-0 win. That is now three wins on the spin for Carlo Ancelotti’s men, who will fancy their chances against their main domestic rivals on the weekend after this display.

It has been a desperately poor opening to the season for Roma, but if they could have hand-picked a match to get back on track in, it would have been this one. They hosted a Frosinone side still looking for their first goal since returning to the top flight, and that search goes on after a chastening experience in the capital. Cengiz Under fired Roma ahead inside two minutes, and further goals from Javier Pastore, Stephan El Shaarawy and Aleksandar Kolarov completed a thumping 4-0 scoreline. It is too early to say that Roma have turned a corner, yet this was a timely confidence boost leading into the first derby encounter of the season.

Inter Milan made it back-to-back league wins as they overcame Fiorentina 2-1. Whilst not leaving it as late as their previous two games against Tottenham and Sampdoria, Luciano Spalletti’s side were again forced to dig deep to secure maximum points. Mauro Icardi netted his first league goal of the season from the spot on the stroke of half-time after Vitor Hugo was harshly judged to have handled inside the area. The debate over VAR in Italy rumbles on. Fiorentina levelled after Federico Chiesa’s long-range effort was deflected past Samir Handanovic by Milan Skriniar, yet it was Inter who had the final say as Danilo D’Ambrosio latched onto Icardi’s through ball before steering the ball past Alban Lafont.

AC Milan’s inability to close out a game was exposed again on Thursday night. This time it was Empoli who claimed a creditable draw in the process. Lucas Biglia’s early strike ought to have sent Milan on their way to a successful away day. However, Empoli’s goalkeeper, Pietro Terracciano, enjoyed a fine night’s work, denying Franck Kessie and Suso with a string of high-class saves which kept the newly-promoted side in the game. Milan were made to rue their wastefulness in front of goal, as captain Alessio Romagnoli’s uncharacteristic error caused panic inside the box, leading to Empoli being awarded a penalty. Francesco Caputo dispatched the resulting spot-kick straight down the middle to earn his team a 1-1 draw. Just one win so far this season leaves Gennaro Gattuso with plenty to ponder.

Krzysztof Piatek continued his remarkable start to life in Italy as he netted the opener in Genoa’s 2-0 triumph over bottom side Chievo. His sweetly struck effort from just inside the area made it six goals in five league appearances for the Polish striker, with Goran Pandev showing pinpoint accuracy to round off the scoring in the second half. Genoa climb to 7th, whilst Chievo remain at the foot of the table.

Not all games can be crowd-pleasers, and that was certainly the case in Sardinia and Bergamo on Wednesday. Cagliari and Sampdoria played out a 0-0 draw, in a match that only really came to life in the final half hour. Gregoire Defrel somehow conspired to miss an open goal, before Dawid Kownacki wasted a golden opportunity as his tame penalty was kept out by Alessio Cragno. It was also honours even in Bergamo as Atalanta and Torino drew 0-0 in a drab affair. Clear-cut chances were at a premium, and at this early stage of the season, it seems that Atalanta may well struggle to repeat their exploits of the past two seasons after losing established first-team regulars Mattia Caldara, Leonardo Spinazzola and Bryan Cristante over the summer.

The surprise package of the season thus far have to be Sassuolo. Last year’s strugglers claimed their fourth win in six as they moved up to 3rd on Thursday with a 2-0 win at SPAL. Second half goals from Claud Adjapong and Alessandro Matri ensured that Sassuolo’s dream start to the campaign rolls on.