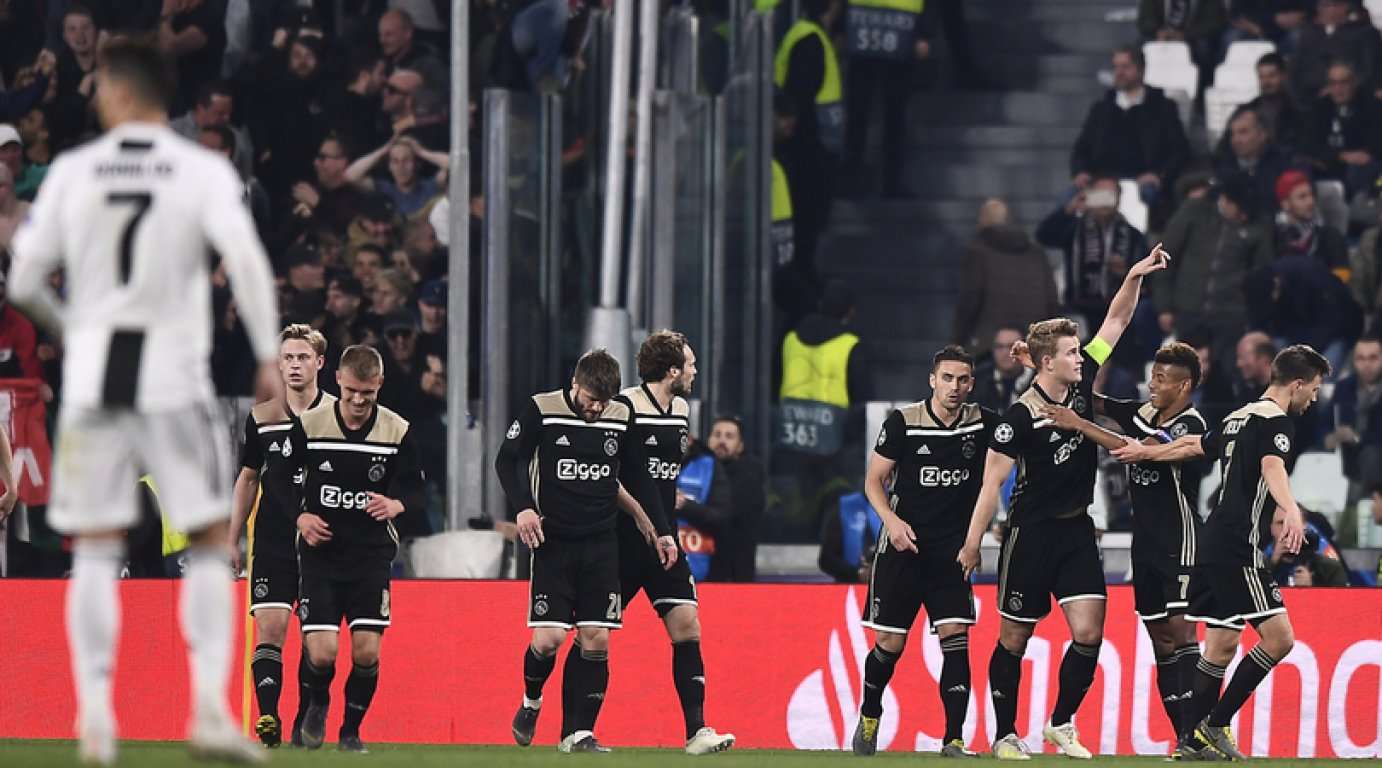 Ajax produced a stunning European display on Tuesday night to humble another European giant as they beat Juventus 2-1 in Turin to progress to the semi-finals of the Champions League. After dismantling Real Madrid in the previous round, the Dutch side proved that was no fluke by thoroughly outplaying the Italian champions here.

The first leg had ended 1-1 in Amsterdam, leaving Juventus as the favourites to secure a last-four berth on their home turf. Yet Ajax had other ideas. In the last 16, they lost 2-1 at home to Real Madrid in the first leg, only to turn the tie around by winning the return fixture 4-1. They were determined to make a mockery of the odds and pull off a shock away win once more.

In the build-up to the game, Juventus were dealt a trio of injury blows, with the experienced duo of Giorgio Chiellini and Mario Mandzukic absent, whilst Douglas Costa was also ruled out shortly before kick-off. Ajax hardly required any encouragement, but seeing Juventus without these key players will have only filled them with more confidence of securing victory.

Ajax started positively and fashioned the first clear chance of the game. Their scorer in the first leg, David Neres, wriggled free in the box, and his blocked effort bounced into the path of Donny van de Beek who could only stab his shot over the bar from six yards out.

A warning sign for Juventus, yet against the run of play they took the lead in the 28th minute. Miralem Pjanic’s corner caused confusion in the Ajax defence, as Matthijs de Ligt pushed his own teammate, Joel Veltman, to the ground. This left Cristiano Ronaldo with a free header from eight yards out, and there was only going to be one result.

Joy and relief could be heard around the stadium, with Juventus seemingly over their rocky start and now in the ascendency. Within six minutes, that was no longer the case. A hopeful shot from Hakim Ziyech was well-controlled by van de Beek, who turned and kept his composure to slot the ball into the bottom corner. Ajax were level on the night and on aggregate.

The tie was in the balance, but it was Ajax who took control in the second half. Their slick interplay caused Juventus countless problems, with Ziyech and van de Beek both forcing fine saves from Wojciech Szczesny, who was single-handedly keeping his team in the contest. It appeared only a matter of time before Ajax finally found the finishing touch to their impressive build-up play, and in the 67th minute, it arrived. Lasse Schone’s corner was attacked by de Ligt, who leapt above Daniele Rugani and Alex Sandro to power a header into the corner of the net.

Juventus simply had no answer to Ajax’s energy and movement, as the away team went in search of a third to put the gloss on a memorable evening. David Neres should have done just that, only to fluff his lines and scuff his shot wide following a delightful through ball from Ziyech.

Ultimately, it did not matter though, with the final whistle putting Juventus out of their misery. For the second successive season, Juventus have been dumped out of the competition at the quarter-final stage. For this young Ajax team, their adventure continues against Tottenham Hotspur who knocked out Manchester City on away goals in a dramatic tie on Wednesday night.

Arsenal completed the job that they started last week to move into the last four of the Europa League, beating Napoli 1-0 on Thursday to secure a 3-0 aggregate win. Alexandre Lacazette’s 35th-minute free-kick separated the teams on the night, as Napoli were knocked out with a whimper.

Napoli were up against it from the off, looking to overturn a 2-0 deficit from the first leg after a disappointing performance in London. They needed the first goal to gather momentum and had the chances to go in front. Captain Kalidou Koulibaly led a swift counter-attack from an Arsenal corner, eventually laying the ball into the path of Jose Callejon, but the winger’s shot was straight at Petr Cech who saved with his feet. Arkadiusz Milik then passed up another presentable opening, heading well wide having been left in acres of space in the Arsenal penalty area.

With the in-form Aaron Ramsey limping off due to a hamstring problem on the half-hour mark, it looked as though Napoli had even more reason to believe that a comeback was possible. Those hopes were swiftly crushed though, as Lacazette’s long-range free-kick wrong-footed Alex Meret and flew into the net.

Needing four second-half goals to pull off a miraculous recovery, Napoli made an attacking change at the break, bringing on Dries Mertens for Nikola Maksimovic. Yet it was Arsenal who almost extended their lead, Meret pulling off a remarkable save to deny Pierre-Emerick Aubameyang.

Time and again Napoli’s final ball was desperately short of the standard required. Lorenzo Insigne’s weak finish led to him being substituted after an hour. He reacted angrily to being hauled off, but could hardly complain following another frustrating evening littered with uncharacteristically poor touches and offside calls going against him.

Napoli’s evening was summed up in the closing stages when Milik missed his kick inside the six-yard box after good work down the left from Marco Rui. Another blank for the Italian side, leaving Arsenal to march on into the semi-finals, where they will face Valencia for a place in the final.