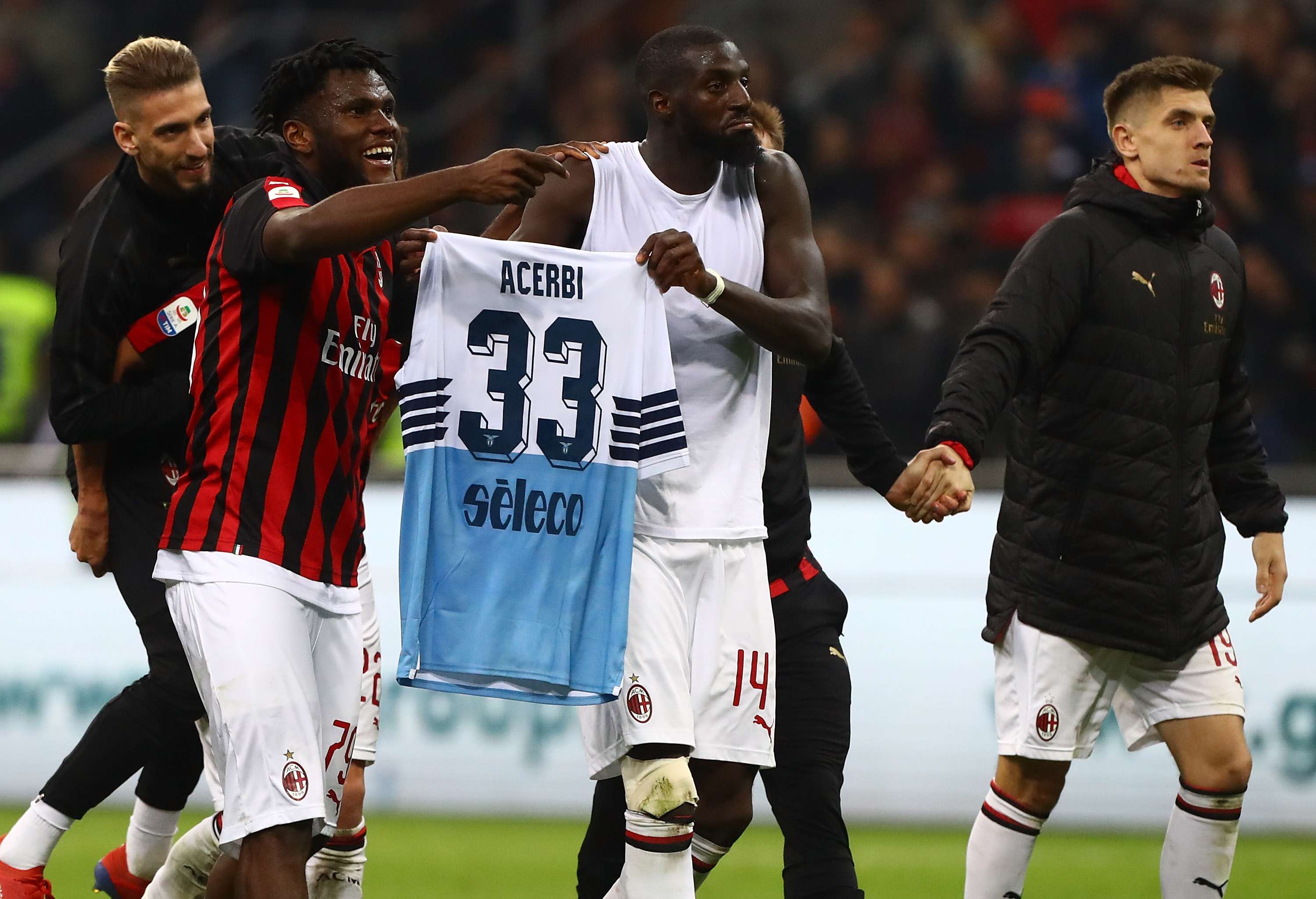 Franck Kessie’s 79th-minute penalty handed AC Milan a crucial victory over Lazio on Saturday night in the race for the top four. Without a win in their last four games, the pressure was on Milan to deliver against one of their rivals for a Champions League spot.

Lazio themselves had faltered in recent games, losing away at SPAL before needing a 95th-minute equaliser to draw at home to Sassuolo last weekend. Another loss here means that their hopes of finishing inside the top four are hanging by a thread.

Yet it could have been so different as Lazio had two clear chances to take the lead. Ciro Immobile was denied by a fantastic save from Pepe Reina inside the opening five minutes, with the Italian forward then turning provider later in the half, only for Joaquin Correa to fail to keep his close-range effort down.

It took until the latter stages of the half for Milan to start to pose a threat. Hakan Calhanoglu’s long-range strike forced Thomas Strakosha to tip the ball over the bar, whilst Krzysztof Piatek went even closer when his looping header drifted inches wide.

Into the second half, and Milan were dealt a double injury blow. Captain Alessio Romagnoli saw his game ended prematurely with a calf problem, with Davide Calabria hobbling off shortly afterwards having taken a knock to the knee.

Milan opted to switch to an unfamiliar back three, but rather than struggling to cope with the unexpected change in formation, the home side started to pile on the pressure in the final quarter of the game. Piatek saw his effort from a tight angle saved by Strakosha, but Milan kept coming and thought they had won a penalty with 15 minutes to go when Francesco Acerbi handled inside the area. Having originally given the spot-kick, the referee overturned his decision after consulting VAR, deeming Acerbi to not have had his hand in an unnatural position.

With 11 minutes left on the clock, Milan were awarded a legitimate penalty. Lazio substitute Riza Durmisi was penalised for his late barge on Mateo Musacchio. This time there were no doubts over the decision, and Kessie stepped up to put Milan ahead.

There was still time for a late scare for Milan. Sergej Milinkovic-Savic appeared to be in behind, only for Ricardo Rodriguez to get his toe to the ball and clear the danger. Any appeals for a penalty were swiftly waved away as Milan’s victory was confirmed.

Milan remain inside the top four with six games to go and will help that this result can spur them on to finish the season strongly and secure Champions League football. Lazio are now three points adrift of fourth place.

Juventus will have to wait for their eighth successive Scudetto after they lost to SPAL 2-1 on Saturday afternoon. Requiring just a point to wrap up the title, an under-strength Juventus side went ahead, with Moise Kean scoring in his fourth consecutive league game. However, SPAL turned the game around after the break, with goals from Kevin Bonifazi and Sergio Floccari helping the team from Ferrara to a memorable win. Attention for Juventus will now turn to Tuesday night’s Champions League clash with Ajax.

Chievo’s relegation to Serie B was officially confirmed on Sunday as they suffered a 3-1 home defeat to Napoli. With just one win all season, it had long been known that Chievo were destined for the drop, and a brace from Kalidou Koulibaly either side of an Arkadiusz Milik goal ensured a comfortable evening for Napoli. Bostjan Cesar’s last minute goal was merely a consolation for the bottom side.

Inter Milan took another step closer to securing Champions League football, beating a spirited Frosinone side 3-1. First-half goals from Radja Nainggolan and Ivan Perisic had looked to have put the game beyond Frosinone, but Francesco Cassata’s goal just after the hour mark gave Frosinone hope. Matias Vecino’s breakaway goal deep into added time finally wrapped up the points for Inter ahead of their clash with Roma next weekend.

Roma will go into that game with two straight wins behind them, as a 1-0 victory at home to Udinese kept them within touching distance of the top four. Edin Dzeko’s winner midway through the second half after a sumptuous through ball from Stephan El Shaarawy was enough for Claudio Ranieri’s men, who remain in with a chance of rescuing what has so far been a disappointing campaign.

Bartlomiej Dragowski produced a stunning goalkeeping display to earn Empoli a 0-0 draw away at Atalanta on Monday night. Atalanta attempted a staggering 47 shots on goal in the game, but Dragowski made 17 saves in total to leave Atalanta two points outside the top four ahead of their trip to Naples next Monday.

Sampdoria earned the local bragging rights on Sunday afternoon, seeing off Genoa 2-0 to end their run of two consecutive losses. Gregoire Defrel’s 3rd-minute goal set Sampdoria on their way, and the game was put to bed when Davide Biraschi was sent off early on in the second half for denying a clear goalscoring opportunity with his arm. Fabio Quagliarella stepped up to dispatch the penalty and put Sampdoria back in the race for a European place.

Torino were held to a 1-1 home draw with Cagliari in a bad-tempered game that saw three red cards handed out. Simone Zaza gave Torino the lead early in the second half but was then sent off with 17 minutes to go. Leonardo Pavoletti equalised two minutes later, and despite Luca Pellegrini and Nicolo Barella being given their marching orders in the final ten minutes, Cagliari held on to further dent Torino’s hopes of landing European football for next season.

Vincenzo Montella’s first game back in charge of Fiorentina ended in a 0-0 draw against Bologna. Following Stefano Pioli’s resignation earlier in the week, Montella was re-appointed at the club he left in 2015 but was unable to inspire a winning start from his players. Fiorentina are winless since February 17th, whilst Bologna picked up an important point in their quest for safety, keeping them two points above the bottom three.

Parma secured a second straight 0-0 draw, this time away at Sassuolo on Sunday. Parma squandered a golden opportunity to claim just their second win of 2019 when Fabio Ceravolo’s penalty was saved late in the first half by Andrea Consigli. The result leaves Parma six points clear of the drop zone after a torrid second half of the season.