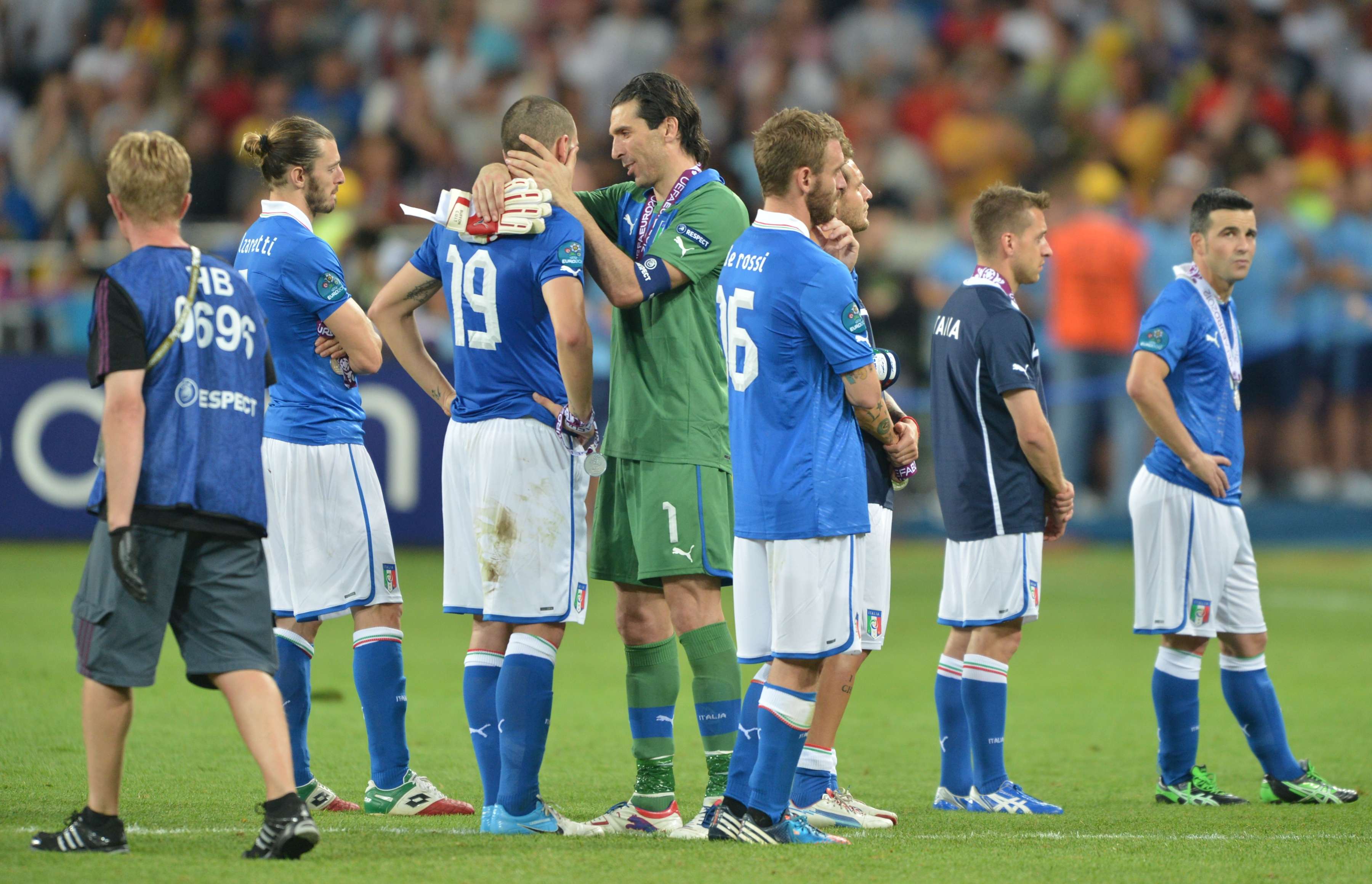 The Azzurri started the decade of the 2010’s as the reigning world champions, fell off their pedestal dramatically and ended it with an optimism of better days ahead.

As the football world entered the year 2010 there was excitement in the air. There was a World Cup to look forward to and it would take place in South Africa as the sport’s showpiece event was hosted by an African continent for the very first time.

As the holders, Italy were listed among the favourites for the crown which they had triumphed so dramatically in Berlin in 2006.

They had the same coach in Marcello Lippi and many of the same players that lifted the most coveted prize in the game. They had a stable side of proven performers on the big stage and their group which consisted of Paraguay, New Zealand and Slovakia, could not have been kinder to the four time world champions.

However whether it was a lack of motivation, players tired after a long season or Lippi’s tactics were simply outdated, the team from the peninsula failed to win a game in that group. They drew with Paraguay and the Kiwis and when needing a victory against the Slovaks were defeated 3-2, which meant they ended the group stage dead last.

It was arguably the greatest shock in the tournament’s history, all things considered.

Prior to the competition it had been announced that Cesare Prandelli would succeed the former Juventus boss at the helm of the nation, and the man from Ozinuovi had much to do.

He made a number of changes to the player personnel, with the likes of Mario Balotelli, Antonio Cassano, Leonardo Bonucci and Thiago Motta becoming integral members of his starting line-up.He also instilled a more pro-active mindset to the way the team played, with more emphasis on attack and possession.

It was a bit of a rocky start, as the players took some time to adjust to the former Fiorentina coach tactics. However qualification was secured for Euro 2012 and once there, the team performed beyond expectations. They grew into the tournament and got better as it went on, progressing out of their group, finishing behind Spain.

They peaked in the knock-out stage, as they dominated England and Germany in the quarter-finals and semi-finals respectively. They won the first via a penalty shoot-out and got past their German rivals courtesy of a Balotelli brace. In the final however, they were ravaged by injuries and succumbed to Spain by a scoreline of 0-4.

A bronze medal in the Confederations Cup gave more hope of a sustained shot at a better performance at the World Cup in 2014 in Brazil. However, despite a solid start defeating England, they lost to both Costa Rica and Uruguay, the latter of which the officials missed a “vampire like” biting by Luis Suarez on Giorgio Chiellini. Prandelli subsequently resigned thereafter.

Back then as is the case now, Juventus are the dominant force in Calcio and the man that started the Bianconeri’s reign was given the job of leading Italy, that being of-course Antonio Conte. The former playing midfielder resigned just a couple days into pre-season preparations for the 2014-2015 campaign after a falling out with La Vecchia Signora over transfers. The Lecce born tactician famously proclaimed “You can’t eat at a €100 restaurant with €10 in your pocket.”

Considering he was handed the task of taking over his nation where transfers and purchasing players were not an option, one must wonder, what were his thoughts in accepting the post.

Nevertheless, his tenure at the helm of Gli Azzurri will be fondly remembered by those with an affinity for Italian national team. As always is the case though, a large section of the media and fanbase were critical of Conte initially.

Particularly his player selection and his tactics, both of which were considered “too defensive and negative.” Creative players like Andrea Pirlo, Cassano, Sebastian Giovinco and striker Balotelli were all left out of the 23-man squad that headed to France for the Euros.

Conte favoured team ethic, understanding of his stringent formation over the mercurial talents that were available. Him and the team however exceeded all expectations…With what all and sundry dismissed as the worst Azzurri squad in 60 years, they topped their group, included in which was the highest ranked European nation at the time, Belgium. An impressive victory over Spain in the second round was followed by a loss against Germany on a penalty shoot-out in the quarter-finals.

Conte however did not stay past the Euros, opting to return to club football to take over at Chelsea. Giampiero Ventura was appointed as his successor and what was to follow for the proud football nation would be a disaster of epic proportions.

Poor player selection, negative tactics and little to no imagination from the former Torino boss meant that the nation’s team regressed on the world stage.

They finished a massive five points behind Spain in their qualifying group for the World Cup of 2018 scheduled to take place in Russia. It meant they had to go through the play-off route, of which they were drawn to face Sweden. Despite the difficulties that any two-legged match can bring, Italy were expected to overcome their Nordic opponents and qualify for the global football extravaganza.

They failed and did so badly! A 0-1 loss in Stockholm was followed by a 0-0 at the San Siro and it meant they missed out on the World Cup for the first time since 1958. It sent shockwaves throughout the Italian footballing community; Ventura was relieved of his duties soon and the President of the FIGC, Carlo Tavecchio resigned five days later.

Several veterans also announced their international retirement, including midfielder Daniele De Rossi, who’s video of him arguing with Ventura’s assistant when he was asked to warm up to be subbed in went viral. The Roma man had pointed quite clearly towards forward Lorenzo Insigne, suggesting the Napoli player should be subbed on instead as Italy needed to score.

It showed a total lack of understanding by Ventura on what was required at the time and his reign will forever be remembered with immense regret.
While the Italian FA searched for a new manager, Azzurrini(Under-21) manager Luigi Di Biagio took over the handling of the team for the March friendlies versus Argentina and England, neither of which resulted in a win. In mid-May 2018, the FIGC made their choice and they gave the top post in the nation to Roberto Mancini.

There were a number of candidates for the job and for many Carlo Ancelotti was considered the favourite due to his great managerial carear, including winning the Champions League three times and league titles in four different countries. However he failed to agree terms with the FIGC and the man affectionately known as “Mancio” was appointed.
Mancini had a number of critics, mainly due to his teams being negative and for the most part boring to watch. However, what he has achieved so far for his country is nothing short of remarkable.

As with previous managers, the start did not inspire much confidence, as a narrow 2-1 victory over Saudi Arabia and subsequent failure to progress past the group stage of the inaugural UEFA Nations League, left the media and fans alike skeptical of the former Inter and Manchester City boss.
It took time, but his philosophy and ideas of the game slowly, but surely began to bear fruit.

Mancini invested heavily in young players, with the likes of Gigio Donnarumma, Nicola Barella, Federico Chiesa and others complimented the likes of Jorginho, Marco Verratti and strikers Ciro Immobile and Andrea Belotti.

The team plays a 4-3-3 formation based of pressing, possession, quick one and two touch passing, quick movement between the lines. However, what has arguably been the most significant change is that this Azzurri plays the same way whether home or away and no matter the score-line. Past teams would look to score and want to hold on to what they had and drop off their intensity after it was clear that the result was known.

THIS Italy squad under the former playing forward plays on the front foot from minute one until the 90th.
In their qualifying campaign for Euro 2020, they confirmed their participation with three games to go, but they did not rest on their laurels. In the six team group, they beat all comers, going a perfect 10 wins out of 10 games to top the group, thus becoming on the sixth team to achieve the feat. They scored 37 goals, allowed just four and had 19, yes 19, different goal-scorers during the qualificazione!

So as the decade draws to a close, there is much positives to take forward from this Italy squad and with Euro 2020 the first tournament of the new one, who know’s, maybe that optimism may just turn into silverware being lifted.
What a start to a new decade that would be!