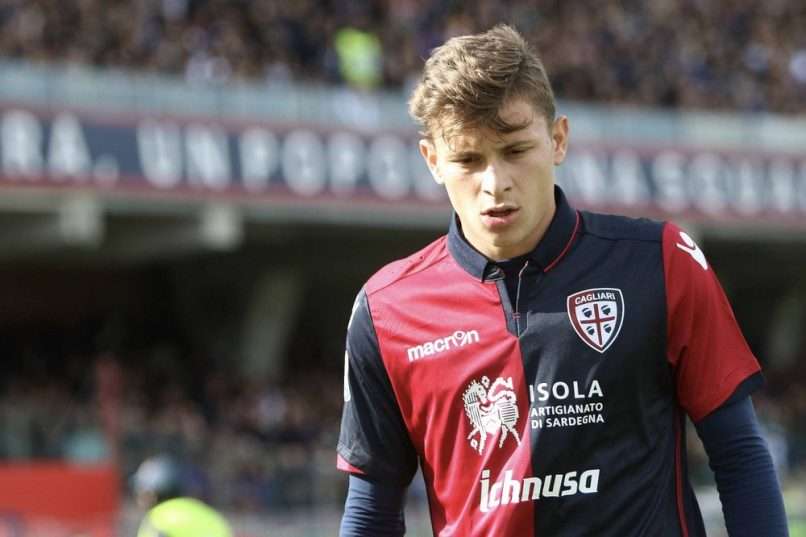 Since breaking into the Cagliari first team in 2016, Nicolò Barella has been a player to keep an eye on. Two years later, it seems that a move to a top European club is only a matter of time. Following his rapid progression, what could lie ahead for the young Italian midfielder?

Having made his Serie A debut in the final month of the 2014/15 season, Barella was sent out on loan to Serie B outfit, Como. His statistics there were unspectacular, as he provided a solitary assist in 16 appearances. Yet Cagliari had seen enough and brought him back into the first team squad ahead of the 2016/17 campaign. It is at this stage that Barella began to establish himself.

He played 28 games in his breakthrough campaign, increasing that to 34 the following year, and is on course to better that number again this season. It is clear that he has become indispensable for the bottom half Serie A side. Statistics alone do not illustrate the impact that Barella has had. In his two full seasons of top-flight football, Barella has scored 6 goals and delivered one assist. Just like his time at Como, these numbers do not stand out. However, when watching Cagliari there can be no doubt that he is the heartbeat of the team. His work rate on and off the ball is unrivalled, as he is able to relieve the pressure on the defence both with his passing ability and his tenacity in winning the ball back.

Cagliari manager, Rolando Maran, lauded praise upon the youngster earlier in the season, labelling him as “extraordinary” and tipping him to become a “key figure in the Nazionale going forward.” At just 21 years of age, Barella has already made a lasting impression at his hometown club.

Maran’s prediction proved accurate. In October 2018, Barella made his first start for Italy in a friendly at home to Ukraine. He has since been an ever-present, playing ninety minutes against Poland and Portugal in the UEFA Nations League. The fact that he is keeping the likes of Roberto Gagliardini, Lorenzo Pellegrini and Bryan Cristante out of the side, all of whom ply their trade at the top end of the division with Inter Milan and Roma, highlights how well Barella is performing at Cagliari.

Prior to his debut, Italy manager, Roberto Mancini, acknowledged that Barella is a player with “great prospects”. Following his appointment in May 2018, Mancini has looked more towards youth than his predecessors. It appears that he sees Barella as an integral part of Italy’s future.

How can Barella improve?

With each game, Barella continues to develop into the complete midfielder. He is still in the infancy of his career though, so improvements can be made. One of his strengths can also be a weakness for him at present, and that is controlling his emotions.

Supporters will accept that quality on the pitch can wane at times, but demand that full commitment must be exhibited at all times. Barella never fails to deliver on this front. There is a fine line between passion and recklessness though, and this is what Barella must learn if he is to become the outstanding player that he promises to be.

He was booked 9 and 13 times respectively in his first two seasons at the club, whilst receiving a red card in each of the campaigns as well. These moments of ill-discipline meant that he missed six matches across the two seasons due to suspensions. Cagliari failed to win any of those games, outlining how his indiscretions hurt both himself and his team.

Clubs from England and Italy are said to be interested in acquiring the services of Barella. Chelsea, Tottenham and Liverpool have been linked with making a move, whilst Inter Milan are rumoured to be plotting their own bid in the coming months.

Cagliari president, Tommaso Giulini, realises that Barella seems destined to leave but is hopeful of hanging onto his star player for now. In a recent message, Giulini claimed that Barella is “very happy here,” whilst seemingly appealing to the fans by saying “it’s only right that we enjoy him for as long as he’s here with us.” Cagliari are maintaining a defiant mood for now, although a big move in the summer looks likely. Is Barella ready to move to the elite level of European football? We may well soon find out.

This piece was extracted from the Roligan Journal, an exquisite and free magazine on world football. Download your copy here.