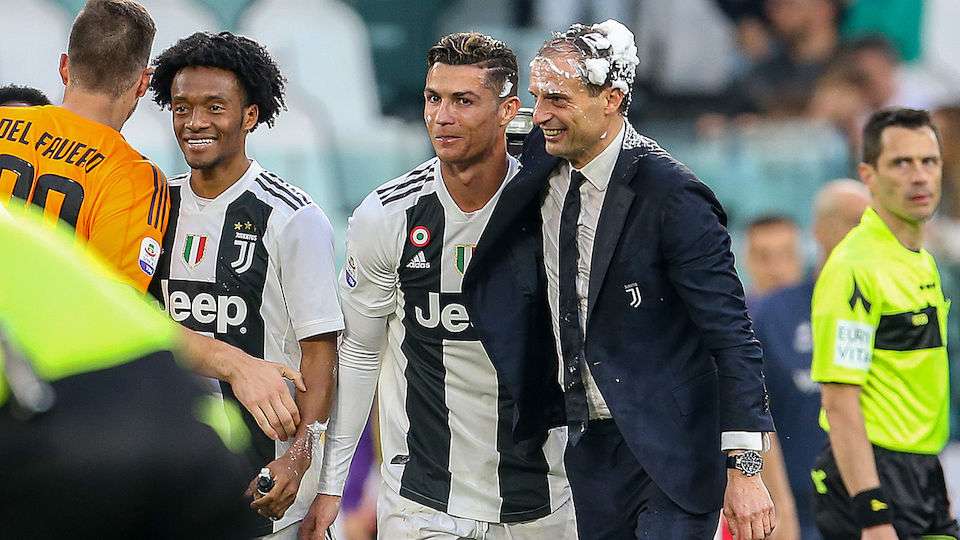 ‘Juve are like an aircraft carrier on Lake Como,” wrote Gazzetta dello Sport editor Andrea Monti on Sunday morning, “there isn’t much room for other ships’. As low-key title celebrations died down, the Old Lady clutching her 8th successive Scudetto, Easter Sunday was one of reflection in Turin. Juventus’ title carrying a sense of the rueful after their Champions League exit to Ajax the week before. A 20 point margin to Napoli in second underlines their domestic dominance yet, despite the unprecedented success, Juve and coach Massimiliano Allegri sit at a crossroads.

Although Juventus’ 2-1 victory over Fiorentina meant a record number of titles in a row for Europe’s top five leagues, club twitter branding their success ‘W8nderful’, and despite the champagne spraying and Juan Cuadrado covering his coach in shaving foam, the party was less than joyful. And not for the first time. Napoli ran Juve close last season but the Champions League quarter-final loss to Real Madrid, Juventus having lead 3-0 at the Bernabeu, coloured their eventual Scudetto win. In Gazzetta, Monti went as far to brand this ‘the saddest of their recent triumphs.’ With Cristiano Ronaldo enlisted after two Champions League finals in the last five seasons and a squad in its prime much more was expected in Europe.

“It’s a beautiful day,” Max Allegri insisted, “we have put aside the bitterness of the Champions League.” “It’s something special, which shouldn’t be taken for granted” explained Sami Khedira, “we need to accept our elimination, even if it hurts.” “It was a year of success, we are happy. You can’t win all the time,” confirmed Ronaldo. “We felt that we could do more and we wanted to win but only one side can win the Champions League.”

Despite their despondency, Ronaldo is right – the Champions League was not, even with the 100 million euro man, a given. ‘The Champions League is a roll of the dice,’ Monti agreed, ‘as shown by the misfortunes of other suitors; Manchester City, Real Madrid and Bayern Munich.’ Nevertheless, the manner of their defeat will continue to dominate, much as it does at PSG, and criticism has been evident. Speaking on Russian TV, Jose Mourinho deemed Juventus “not physical enough” against Ajax while Napoli president Aurelio De Laurentiis said that Ronaldo’s arrival “didn’t help” their cause. Monti meanwhile blamed a lack of intensity for their exit. ‘Intensity is not a gift of nature,’ he explained, ‘this is where our championship comes into play.’

Allegri meanwhile remained stoic before the Fiorentina match. “Cristiano plus Juventus doesn’t mean the Champions League is secure. He’s the future of Juventus,” the Italian explained. “We don’t need a revolution, we need to improve the quality of our play and how we manage games.” Nevertheless despite Allegri’s attitude who, report Football Italia, says “criticism is part of the job and adds extra motivation,” while explaining he “doesn’t have the key to the truth of how football works,” some sections of the Juventus fan base have become increasingly critical of their coach in recent weeks. Curva Sud ultras turned their banners upside down in protest on Saturday afternoon. We have to “learn how to deal with unexpected events better,” said Allegri “because those moments can change a tournament.”

Nevertheless, Gazzetta dello Sport, who devoted the first 13 pages of their Sunday edition to Juve’s eighth Scudetto win – a feat they’ve regularly referred to as ‘Scudotto’, a play on the Italian word for eight, continue to largely praise the Juve coach. ‘Allegri and the art of management: Juventus has its Ferguson’ read one headline while Sunday’s paper said dissenting fans were only ‘a small group that has regained courage after Juve-Ajax, but fortunately, they’re always a minority.’ To their point, Allegri now sits second behind Giovanni Trapattoni as the most successful Serie A coach of all time.

While revolution, as the 51-year-old Allegri suggests, is unlikely, change of some sort could be coming. With his contract set to expire next summer and various other major European clubs reportedly interested at one time or another of late, Allegri is due to meet Juve chairman Andrea Agnelli to discuss his future. Gazzetta reported that their meeting will centre firstly on the state of the squad, Benfica forward Joao Felix and Roma attacking midfielder Nicolo Zaniolo (both 19) supposedly top of the list, as well as the coach’s salary as, the paper says, ‘Allegri is one of the most respected managers in Europe and rightly wants to get paid correctly.’ While Juve sporting director Fabio Paratici insisted before the Fiorentina game that ‘we could not have been clearer than this. Allegri will stay,’ Gazzetta reported that there could yet be a parting of ways while Allegri has also made it clear that ‘he could also remain without extending.’

Although Agnelli had said after the Champions League defeat that the club would continue with the same coach, Gazzetta insisted that ‘all the shadows have not gone away’. Also heavily linked with both Roma and Inter jobs in recent weeks the shadow of Antonio Conte continues to loom over Serie A, including Juve. The former Juventus, Chelsea and Italy boss told an Italian talk show last week he wanted to return next season to a ‘project that interests me’ while reportedly Juventus held preliminary discussions with Conte last week. Ronaldo meanwhile, despite press rumors he would consider leaving Juve this summer, remains committed. “I am staying at Juve, 1000 per cent,” he told Sky Italia as the title was secured with both Allegri and Paratici referring to him as ‘the future of Juventus’.

Assuming links with Conte are true, considering the Champions League is a key goal any approach would remain a little suspect. Despite his talents never being in doubt having revolutionized Juve at the start of their Scudetto run, the Old Lady finishing seventh in their previous two campaigns, while engineering a similar overhaul with Chelsea to win the Premier League at the first attempt, not to mention a masterful coaching performance for Italy’s EURO 2016 second-round win over Spain, the Champions League has always been a issue for Conte. In three campaigns as coach a quarter-final in 2013 remains the high point while a group stage exit to Galatasaray a year later remains a considerable low.

Although evolution may be necessary, Allegri and Ronaldo’s pragmatism makes sense. Many Champions League triumphs are subject to a degree of entropy, more than the usual league campaign and, although disappointed, Juve continue to build. Allegri remains the right coach for the club despite a smattering of fan unrest having proven his worth in reaching the two Champions League finals already. Juventus, unlike PSG – a club all too used to underwhelming league successes amid European disasters, are an intelligently run club and prudent in the transfer market. Maintaining those aspects will be key for continental success rather than flirtations with Conte or a drastic squad overhaul. Nevertheless, whether the club achieve their goals sooner or later, for now, Juventus’ latest demolition of Serie A shows they are likely to remain the only aircraft carrier on Lake Como for a while yet.

You can read more content from Adam on his blog.