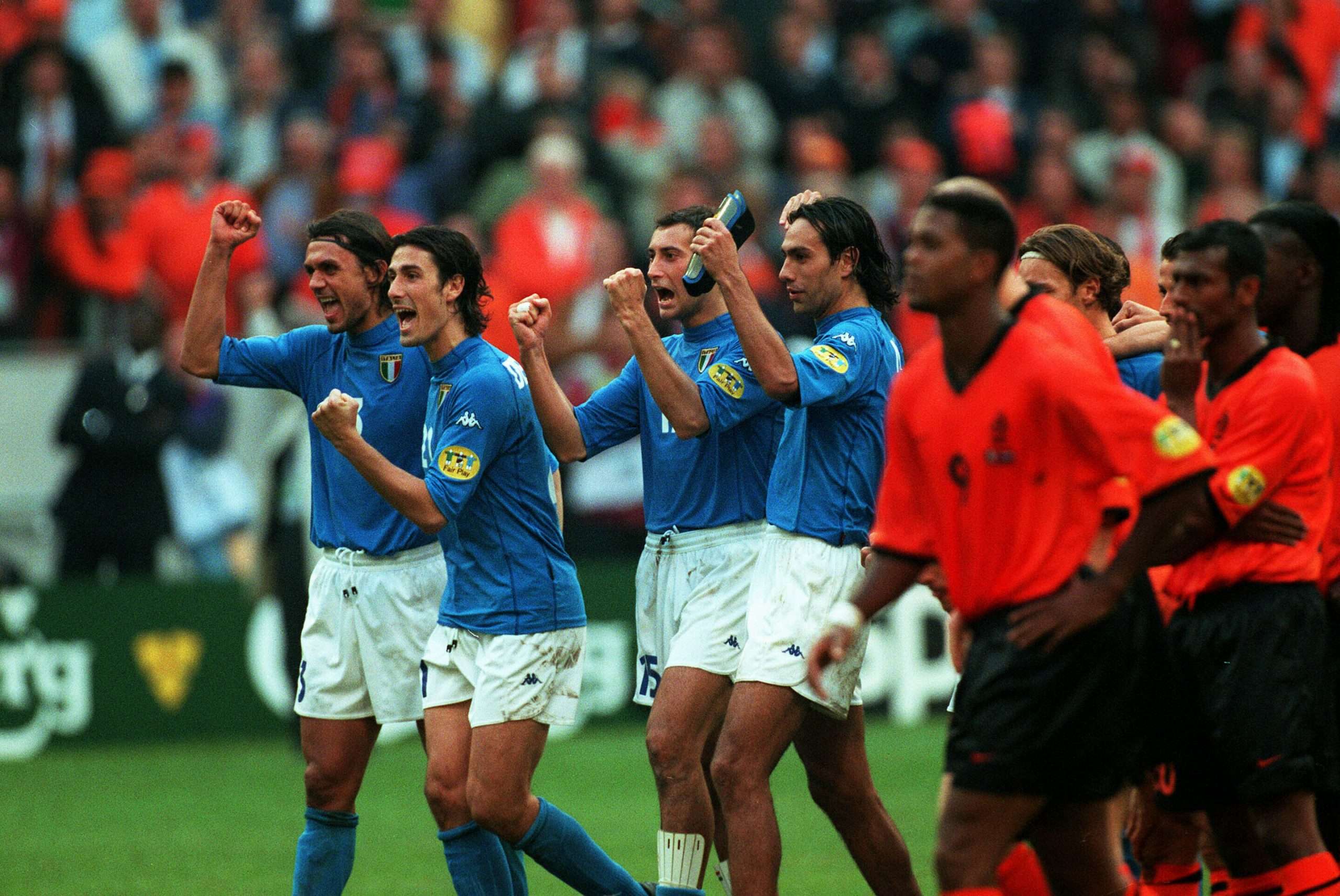 If the shadow of three consecutive World Cup penalty shoot-out defeats loomed over the Italian players in the Euro 2000 semi-final, then it didn’t show. A partisan Dutch crowd had watched on as the host nation failed to break down an Azzurri side who played the majority of the 120 minutes with a man short. When the spot kicks arrived there was tension, redemption, and a touch of pure class as Italy removed the penalty shoot-out albatross from around their collective neck.

The heartache of the 1990 World Cup semi-final defeat to Argentina was always going to be a difficult one to get over. As host nation, in a packed Sao Paolo, it seemed to some like Italy were destined to lift the trophy on home soil. It was perhaps the pressure of having the nation right there behind them that lead to Roberto Donadoni and Aldo Serena missing their penalties, as the holders progressed to the final at the expense of their hosts.

Who knows at what point, if at all, thoughts of that summer evening in Naples arrived in the minds of those selected to take a spot-kick in the final four years later? There is an intense mental aspect to the penalty shoot-out, with confidence a prerequisite for a successful taker. If 1990 didn’t enter the minds of Messrs Baresi, Massaro and Baggio, then it certainly was at the forefront of the Azzurri fans. Again, they had to endure the pain of penalty defeat on a grand stage as their national team lost the final to Brazil.

Four years later, France would be the home nation as the quarter-final between the hosts and Italy went into penalties. Roberto Baggio had earnt redemption from the spot in the group stages with a conversion against Chile, which may have led some to think the nation’s penalty pain was over. Despite Baggio converting again in the shoot-out, Demetrio Albertini and Luigi Di Biagio both failed to beat Fabien Barthez as the Azzurri obtained a most unwanted hat-trick of shoot-out defeats.

The signs were perhaps in the Amsterdam air on that summer evening of 2000 that the footballing Gods may just look down favourably on Italy this time. The Dutch had already missed two penalties during the match and maybe, just maybe, this would be Italy’s turn.

Italy are first up in the shoot-out and Luigi Di Biagio steps forward, looking to grasp his moment of redemption. It was the first spot-kick the Inter player had taken since he crashed the ball off the Stade de France crossbar two years earlier. It takes real intestinal fortitude to volunteer to put yourself through something like that again. Di Biagio is ultimately rewarded, as his right-foot shot finds the top corner of Edwin van der Sar’s net.

Frank De Boer is first up for the Dutch, with thoughts of his miss from the spot in normal time surely swirling around in his mind. The home of Ajax had been brimming with Oranje enthusiasm prior to kick-off but tension had long-since filled the air. De Boer’s effort is that of a man undecided on where to place the ball as he shoots just right-of-centre and watches Francesco Toldo make his first impression on the shoot-out by saving comfortably.

Next up for the Azzurri is Juventus utility man Gianluca Pessotto, who initially seemed a surprising choice given the attacking players that Italian manager Dino Zoff had at his disposal. The term utility man is by no means disparaging, describing a player who was a regular for the national side and could play adeptly in both defence and midfield. Pessotto had taken a penalty in a shoot-out win for Juventus in the 1996 Champions League final against Ajax, who had a certain Edwin van der Sar in goal that night.

Here he is again, standing over the same short run-up, hands on hips and facing the same keeper. The mind games return: van der Sar dives to his right, the same corner that the Italian scored in four years earlier. The Juve man goes the other way this time as he slots the ball into the opposite corner with a slight shake of his fist,his only sign of emotion.

The next Dutch taker is also something of a surprise, as big defender Jaap Stam strides forward. Stam was the epitome of a no-nonsense, hardman defender so it was hard to imagine his penalty would be delicately placed. The adrenaline, added to the pressure of the circumstances, forces Stam’s powerful driven effort high over Toldo’s crossbar. Italy are two in front, they just need to stay calm and not do anything silly…

Francesco Totti was having a fantastic tournament, and as a result was brimming with confidence -not that he was ever lacking in that department. The Roma captain had scored a cheeky chipped penalty in training a few days earlier, the kind made famous by Antonin Panenka in the final of the Euros in 1976. Totti had told his team-mates that he would take a penalty that way in a game if the opportunity arose and, as he walked to the spot the men in blue were left thinking ‘surely he won’t do it now’.

Totti had scored five from five from the sport for his club that season and would later go on to become the all-time top penalty scorer in Serie A history. He places the ball on the spot, steps up and clips the ball gently into the net with van der Sar going the wrong way. Arms outstretched, Totti turns to face his team-mates on the halfway line as he drops to one knee as if saying ‘I told you I would do it’. There aren’t many players who could pull off that kind of penalty in such circumstances, in fact, there aren’t many who would dare try!

Patrick Kluivert is next up for the hosts, as they score for the first time in the shoot-out. Kluivert’s was, with the exception of Totti’s, probably the best penalty of the night as he placed his right-foot shot in off the upright. Paolo Maldini is next in line for the Azzurri and has the opportunity to send his country to the final. The Milan legend was there in 90, 94 and 98 and it seemed fitting that he be the one to end the penalty misery. It wasn’t to be though as van der Sar throws himself across his line to save what was in fact a well taken penalty.

The aforementioned footballing Gods had another hero in mind to see out this match and end Italy’s spot-kick jinx. A few months earlier Francesco Toldo was Italy’s third choice goalkeeper.He moved into second spot when Angelo Peruzzi decided he didn’t want to be in the squad unless he was first-choice. Gianluigi Buffon was the man who held the gloves for the national side although an injury in the final warm-up match before the tournament ruled him out, and Toldo in.

The Fiorentina keeper had saved from De Boer both in normal time and in the shoot-out, and watched as Stam’s effort missed the target. Paul Bosvelt was the next to face Toldo knowing he had to score to keep the game alive. By this point in the shoot-out the Italian goalie looks like he is filling the entire goal. Toldo springs across his line to repel Bosvelt’s effort and sends his country into the final.

The final against France was another which didn’t go Italy’s way although it was a golden goal rather than a penalty shoot-out that beat them. Although the win on spot-kicks against the Dutch didn’t lead to the trophy, it did remove the stigma of the shoot-out from the Italian psyche. Six years later the Azzurri would go on to win the World Cup in a penalty shoot-out which, had it not been for that win in Amsterdam, may have gone differently.