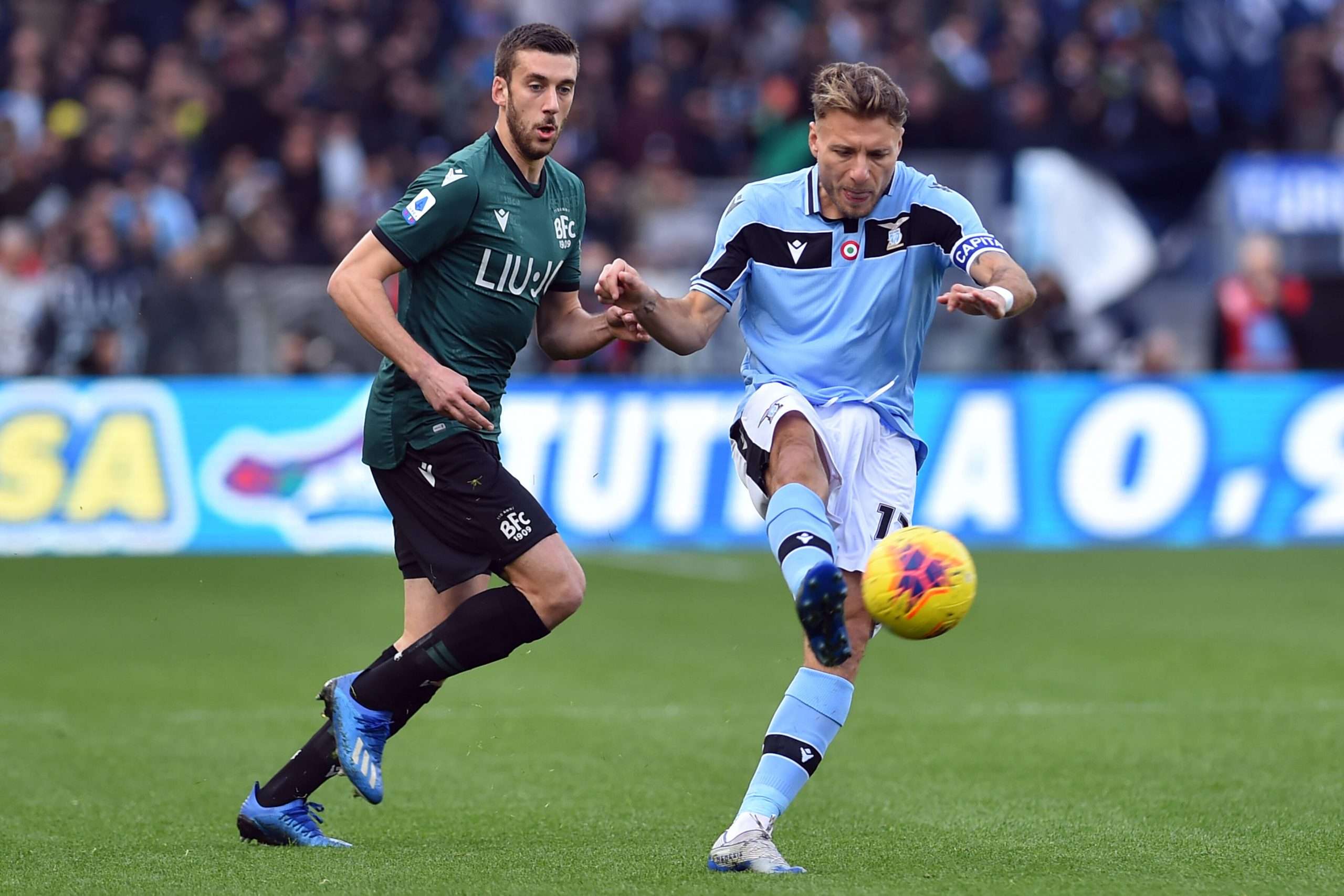 Simone Inzaghi is clapping Lazio’s loyal travelling support. He even throws in a wave for good measure. It seems this might be the end. After almost three years in charge, it feels as though Inzaghi’s time at Lazio is over, with Juventus and AC Milan both rumoured to be interested in securing his services.

That was on May 26 2019. 11 days earlier, Inzaghi had led the side to the Coppa Italia, beating Atalanta 2-0 in the final. Yet after back-to-back fifth-place finishes in the previous two seasons, Lazio had just lost 3-1 against Torino, confirming that they were to end the Serie A campaign in a disappointing eighth position.

In many ways, it had been a typical Lazio display. Some bright moments in the first half, but the side had wasted chances, before conceding two goals in as many minutes in the second half – a setback that they never recovered from.

Fast forward twelve months, and the picture is very different. Inzaghi is still very much at the helm, but Lazio are no longer under-achieving. Quite the opposite, in fact. With the Serie A season currently on hold, they sit just a point behind leaders Juventus with 12 games to go. In this article, we take look at the main reasons for which they have turned their fortunes around.

The Francesco Acerbi story is a well-documented one. The man who overcame testicular cancer after his shock diagnosis in 2013. The man who overcame drinking problems following the death of his father. There is no doubt that he is an inspirational figure off the pitch. The same can be said with regards to his performances on it.

Regular viewers of Inzaghi’s Lazio over the years will have spotted that a familiar pattern has emerged. His team are one of the most entertaining Italian sides around, but they have had a fragility to them defensively. In the previous two seasons, the side conceded 49 and 46 goals respectively, an average of over 1.2 goals per game. In their 26 league games to date this year, they have shipped just 23 goals at less than a goal every game. That is thanks largely to Acerbi.

This is Acerbi’s second season at the club. In his first campaign, he was clearly Lazio’s best defender, but was still unable to make the side a solid defensive outfit. In 2019/20, he has reached another level. At the age of 32, his calming influence at the back has rubbed off on his teammates, making Lazio a much more difficult side to break down.

Finding the right balance between attack and defence has been a challenge that Inzaghi has struggled to master in the past, but with Acerbi now the established leader of the back three, Lazio seem to finally have addressed this issue.

“Milinković-Savić and Luis Alberto, fake talents who are just hunting for cash”. That was the verdict of a section of Lazio’s fans back in October 2018, as the pair were linked with moves away from the Italian capital.

Milinković-Savić has long garnered interest from some of the biggest clubs around Europe, whilst Luis Alberto has had to wait patiently for wider recognition. Yet he is now showing that he is one of the best creative midfielders in Serie A, proving his doubters, which included some of his own fans, wrong.

The Spanish playmaker was unable to make the grade at Liverpool, but his true potential has been realised at Lazio this year. He managed just five assists last season, making it understandable that Lazio’s supporters grew frustrated with him at times, yet the 2019/20 campaign has seen him at his absolute best. He has provided 13 assists already this season – more than any other player in the league.

Whilst Luis Alberto has been the creator-in-chief, Lazio have still needed a prolific forward to finish them off. Step forward Ciro Immobile. The 30-year-old has been outstanding this season, scoring 27 goals in his 26 appearances. Immobile has shown his ruthless instincts this season, and it is no wonder that the side have only failed to score in two of their 26 matches.

Luis Alberto has been directly involved in 17 goals this season, whilst Immobile has contributed to 34, making them one of the finest attacking partnerships in European football. It could prove to be a title-winning combination.

Battling to the end

Along with being labelled as a defensively vulnerable side, Lazio have also struggled with being ‘nearly men’ in years gone by. The team collapsed from holding a 4-1 aggregate lead to being dumped out of the Europa League quarter-finals by Red Bull Salzburg in 2018. They also let an advantage slip against Inter when the two teams were battling for a Champions League spot on the final day of the season just months later.

Yet this season, the tables have turned. Now it is Lazio who are fighting until the final whistle, scoring crucial goals in the dying moments of games. Between October 27 and January 11, the side won six matches thanks to winning goals scored after the 80th minute. Indeed, the week before this run of games started, the side came from 3-0 down against Atalanta to rescue a dramatic draw.

There are some that may claim that so many late winners are a sign of good fortune. However, with Lazio doing it so often, it appears to be more than simply sheer luck. No longer the team that folds during tough moments in games, Lazio have demonstrated this season that they are capable of dealing with setbacks and coming up with the right answers. That is the quality of a champion team.

Can Lazio end their 20 year wait for glory?

Lazio have been a talented team for a while now, but this season they are finally turning that into results on the pitch. Even so, they are still chasing Juventus in the title race for now, and if the Serie A season does resume following the Covid-19 pandemic, they will not be the favourites to win their first Scudetto since 2000.

That Lazio side included Simone Inzaghi, with other iconic names such as Pavel Nedvěd, Alessandro Nesta and Juan Sebastian Verón also shining that season. 2020 could be the year for a new crop of players to cement their places in the club’s history.

The team have tightened up defensively, possess one of the best strikers in the business, and have proved that they are mentally tough enough to match Juventus so far. With these established qualities to call upon, they have every chance of achieving a shock title win.

Massimo Cellino on Serie A returning: “I don’t care anymore, let them do what they want.”

Paolo Maldini criticises Ralf Rangnick: “Before learning Italian he should revise the basic concepts of respect.”