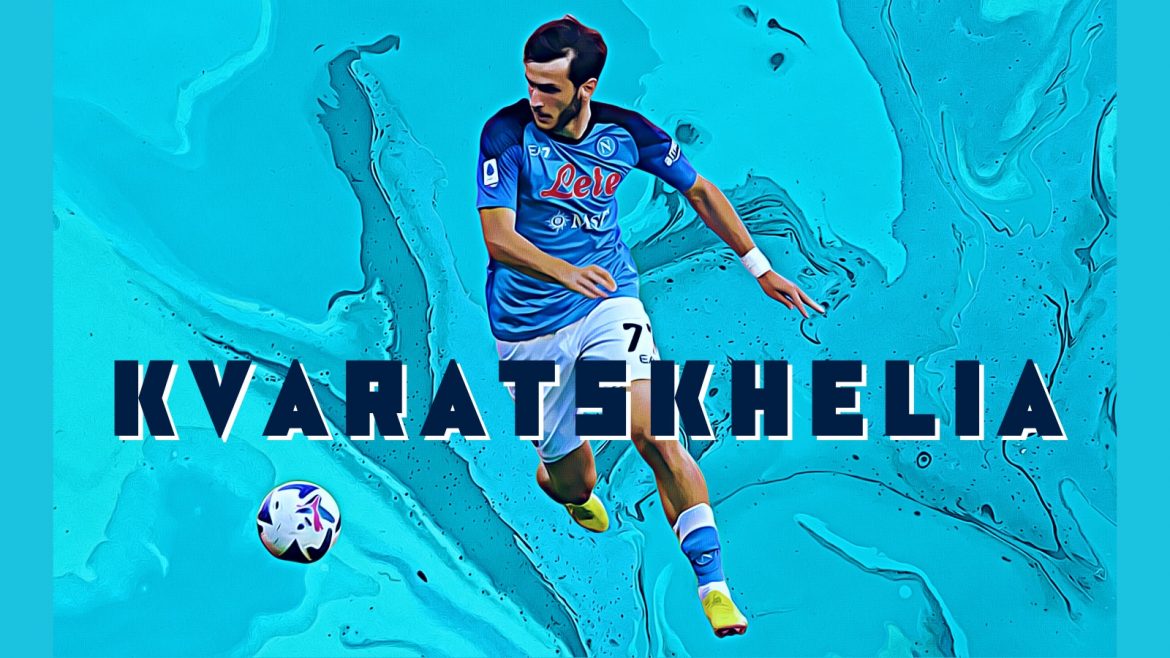 With Khvicha Kvaratskhelia lighting it up in Serie A, Jonathan Maze looks at what has been a sparkling start to the season for the Georgian…

21-year-old Georgian Khvicha Kvaratskhelia has burst onto the world scene this season following his performance against Liverpool, which left Trent Alexander-Arnold looking like an amateur. Khvicha has been so impressive to date that in Naples, they have coined the nickname ‘Kvaradona’ for him. The nickname is pretty high praise for him in a city where Diego Maradona is King, emphasised by Napoli’s Stadium being named the Diego Armando Maradona Stadium.

However long before Kvara – as many call him, was making waves across Europe, he was just a kid from Tbilisi, Georgia. He began his career in Tbilisi, coming through the Dinamo academy making five appearances scoring one and assisting one, before joining FC Rustavi. Kvara went on to make 18 first team appearances for FC Rustavi, scoring three and assisting three.

Lokomotiv then bought Kvara and he scored one in 10 games before being loaned back to FC Rustavi. Kvara’s contract ran down at Lokomotiv allowing him to join Rubin Kazan on a free. He then remained at Kazan for three years, racking up 73 appearances for the club scoring nine and assisting 18. Following this, Kvara made a big money move to Dinamo Batumi for €8 million, it was here that his end product really clicked together as he scored eight and assisted two goals in just eleven games.

Kvara became one of Europe’s hottest commodities thanks to his form at Batumi, with Napoli moving quickly to bring him in for €10 million, only 4 months after he left Kazan to join Batumi.

Kvara has represented a change at Napoli with stalwarts Lorenzo Insigne and Dries Mertens leaving recently, he has become the face of Luciano Spalletti’s dynamic Napoli side. In Serie A this season so far, Khvicha has established himself as one of the league’s best, scoring four and assisting one in seven games.

Napoli boss Spalletti commented on Kvara following his performance against Monza saying, “He is a player with real quality, a fine professional and a good lad.”

Khvicha’s introduction to the rest of Europe, however came against Liverpool in the Champions League, where he came up with a great assist and completed 4/7 dribble attempts, being a constant threat down the left for Napoli in what would be an emphatic 4-1 victory.

Kvara offers Napoli a completely different option from the Insigne who would drop deep and look to retain possession, Kvara instead looks to run in behind stretching defences. The Georgian is dual footed, giving him options to go either way, making him unpredictable to defend. His arrival has been instrumental in allowing Spalletti to play his Napoli side in a way which has seen them start the season so strongly that they are currently top and have the highest goal difference in the league.

Kvara is idolised in Georgia and has scored eight goals already for them in only 17 appearances and has helped them go 10 games unbeaten, with huge wins over the likes of Sweden (a game in which Khvicha scored both goals). His performances for Georgia has given them a huge boost, as they look set to get promoted in the Nations League to League B.

How does Kvaratskhelia compare?

In order to see how Kvara compares to Europe’s best left-wingers we’ve used SmarterScout with the English Premier League as the benchmark on which each player has been scored. The players have been compared based on six variables, with those being; attacking output, defensive output, duels, shooting, dribbling and link-up play. The radar graph below showcases the findings:

Firstly, we see from the attacking output that he doesn’t offer the quantity of the others however this could likely be due to the fact Napoli won’t be attacking as much as Liverpool, Real Madrid and Bayern Munich. We see that defensively, he is not quite effective enough and this is exemplified by the fact his quantity of defending is scored at 83, with the quality only 21, clearly this is an area Kvara must work on. Similarly with duels, aerially Kvara is good but loses out on the ground both in and out of possession.

Where Kvara really comes into his own is in the shooting and dribbling aspects of his game. So far this season he has averaged 0.6 goals per 90 from 2.7 shots per game, which means he scores every 4.5 shots he takes. Kvara on the ball averages 1.4 successful dribbles per 90, however does lose possession 13.7 times per 90.

In terms of link up play, Kvara is quite poor only completing 12.6 passes in the oppositions half per 90, and only 17.9 on average over the whole pitch. however Kvara is not a player who will drop deep to link up, he wants to get running at defenders.

Kvara, in summary, is still a player rough around the edges. However, he has all the talent and some of his poorer areas on the pitch could be down to tactics from Spalletti.

Having proved himself at every level he’s played at and now setting the Champions League alight with his talent too, the only question is what next and is there anything this boy can’t do?

Juventus’ Paul Pogba: “I was in touch with Allegri during Manchester United days