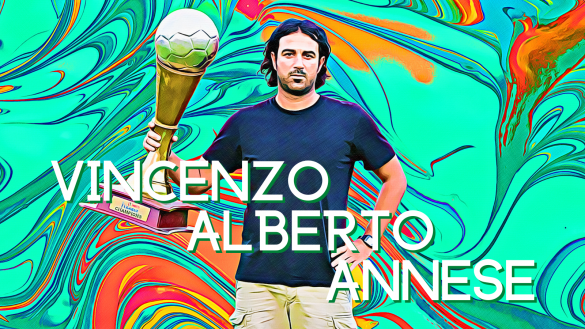 Vincenzo Alberto Annese may have left Gokulam Kerala recently but the impact he made at the club from the south of India will be felt for years to come. While playing an attractive brand of football, Annese’s Gokulam Kerala side won the I-League title twice in a row and created history while doing so.

Prior to the Apulian, only three Italians have managed in India and two of those are Gianluca Zambrotta and ex-Inter Champions League winner Marco Materazzi. But it can certainly be argued that Annese’s influence has been much more historic. And the emphasis on a consistent playing style is one of the key aspects of Annese’s coaching

He told Get Italian Football News: “The key is hard work, commitment and taking each player on the basis of the system in place. There needs to be a familiarity in the coaching style and has to be a hard worker. Players should have the commitment to win each ball, fight for each ball and stay the same in the defensive phase as we are in the attacking phase. They have to be attentive to each second of the game.”

As Annese now looks for a new challenge – with reports claiming that clubs have already approached him, the 37-year-old does believe that Gokulam’s free-flowing approach to the game has gone a long way in improving how football is played in India. And in a country where football is still on the cusp of concrete growth, bringing about a revolution carries a significant value.

“We improved the way Indian football was played and I contributed to it as well. Because we are the only team in many years to score with 12 different players. We scored 44 goals in the season, in 19 games. We went 21 games unbeaten and we made a record.

“For sure, we did it together and it will be remembered for a long time in India. Here in India, every team plays in a 4-4-2 or a 4-2-3-1 – whatever you want to call it. We played the same system, irrespective of which team we played again.

“This has made a big difference in the football style. We played 4-3-3, we attacked all the time. Everybody is interested in attacking and creating spaces for one another.”

While Annese is certainly of the opinion that Gokulam’s playing style has brought about something new in Indian football – which is still rooted in a more conservative brand football, a lot of changes are still needed.

The country is still at 104th in the FIFA rankings and was recently at risk of picking up an unenviable FIFA ban. That is a fair reflection of how structural changes are needed and a bottom-to-up approach is required.

Annese agrees with that notion, having worked in India for a couple of years: “No country is comparable to another country but Indian football needs more good academies for younger players till the age of 7,9, 11 and 12. In India, they put a lot of focus and too much focus on senior team and less on the academy teams. This is what I’ve noticed in the last two years. That needs to change.”

It remains unknown where Annese will manage next, he is someone who has coacheed in Armenia, the Middle East, Africa and even in Italy. But the ex-Armenia Under-19s manager has suggested that it is his dream to manage in Serie A. But he wants to take a different route to success in the Italian top-flight.

He aims to win things elsewhere and return to Italy: “It was my dream to play in Serie A but I couldn’t do it but my dream is to coach in Serie A. This is my dream. I have coached abroad just because it is very difficult to coach in Italy. You need to have a big name like a former player. I want to reach the best point for a foreign coach abroad and come back to Italy as a winner and then coach a Serie A team.”

Perhaps, he could add something fresh to Italian football too, even though Calcio has moved on from the classical catenaccio approach. Annese differs strongly from that and believes that teams now generally do score a lot more goals in Italy.

But parts of the older style still remain and players from abroad can often struggle to adapt to playing in Italy.

He says:“Italian football has changed because it was very defensive earlier and now you can see a lot more goals. We are more international now. There is not just the Italian style of catenaccio, as we have changed this mentality and we score a lot more goals.

“Italy is still one of the countries where it is difficult to score. Players that come to Italy to play find it very hard to be in the first-team but to play in Serie A, it is a big plus because they learn a lot and learn the tactical styles. Spanish is technical and English is physical, as they are run for the whole 90 minutes.”

Despite Italian football’s stylistic development, the country has now failed to qualify for the FIFA World Cup twice in a row and problems remain in the very foundations.

Many in the game – including Roberto Mancini have acknowledged it and the reaction was seen in the UEFA Nations League games recently. Mancini played a host of younger players in the recent games – indicative of how Gli Azzurri want a younger generation to come through.

Annese believes that Italian clubs need to use clubs from Italy more, instead of handing those chances to foreign players. That, he feels, will address a foundational issue in the Italian game.

“I think teams in Serie A and Serie B need to give more chances to younger players and local Italian players, instead of foreign players. They have to put a limit, even for the junior sides. Junior teams also have players from abroad. It is an important thing that Italy believes more in Italian players. That is why they can get unexpected results like failures to qualify for the World Cup in Qatar.

“It is bad for us but it is also good that we won the Euros. I think they need to push more to play with Italian players and less with foreign players. That includes Serie A, Serie B, Serie C and Primavera.”