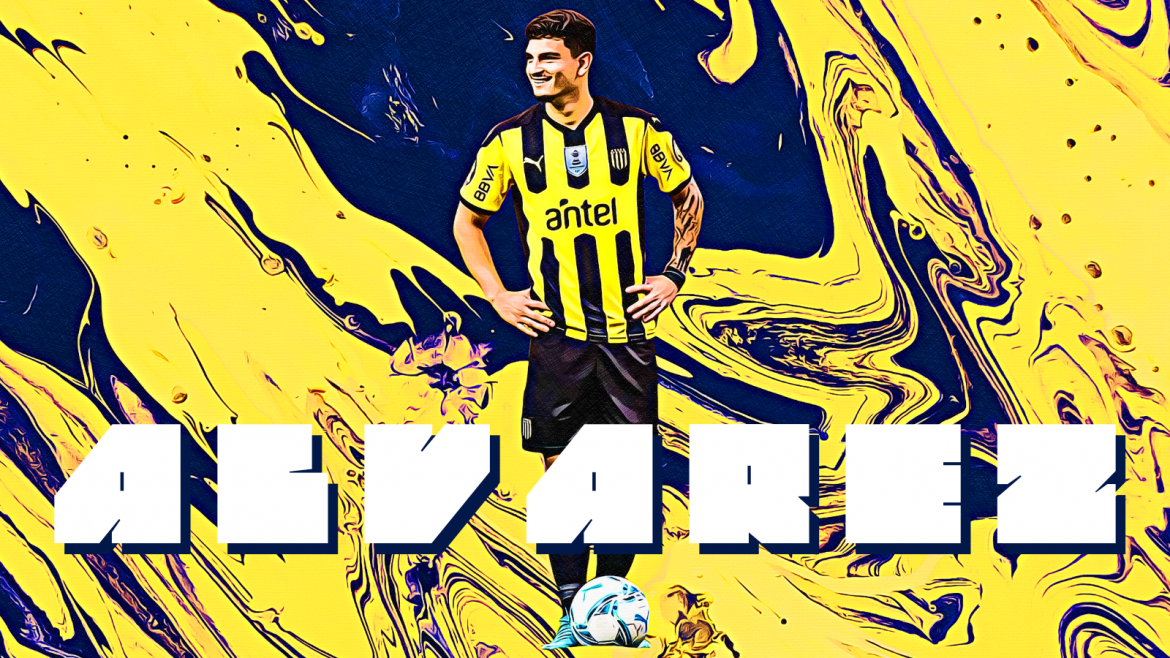 A purveyor of finding talents and raising them to be next day superstars, Sassuolo seem to have found yet another talent who have gone quite under the radar. The player is none other than Agustin Alvarez.

With the club possibly readying itself for the departure of Gianluca Scamacca and possibly Domenico Berardi and Giacomo Raspadori, Alvarez has been brought in to shore up their attack for a small fee of €13 million.

With an ambitious coach like Alessio Dionisi, the striker can truly blossom and maybe take his game to the next level and maybe Sassuolo can be a launching pad to his career. Playing in Uruguay, we look to cover his playing style, his strength and weakness by looking at his performance in particular against Corinthians in the Copa Sudamericana.

Penarol in particular used a 4-4-2 formation where Alvarez was paired with Facundo Torres. On paper this looks like a pretty straightforward two-striker formation but Penarol’s coach Mauricio Larriera opted to use Alvarez as a lone center-forward while Facundo Torres would pull wide or settle into half spaces to finds pockets of space vacated by either wingers Agustin Canubbio or Pablo Ceppelini.

Penarol barely built their attacks from the back like Sassuolo do unless they counter-attack. Most of the time they would have their keeper kick it out to Agustin Alvarez using as a focal point to build their attack from the half way line. This meant that Alvarez was their target man for all build up play.

To facilitate build up play, particularily counter attacks, and also to allow runners especially their wingers and Torres to make runs behind, Alvarez would either hold up the ball or go to the wide areas pulling a center back in the opposition out of their position and creating space

Once the attack is progressing through the flanks, Alvarez does not particularily seem to take part in the progression or in the flanks but would rather stay in the center and wait for a cross or a pass.

Not the tallest of players, Alvarez maximizes his aerial ability in a better way by putting himself between the ball and the opposition defender and timing his jump well to score goals as we can see in this sequence of play.

And like all traditional attackers like Aubameyang, Alvarez preyed on defenders by playing off the defenders shoulders and waiting on through balls.

Although Penarol isn’t a team that presses much, Alvarez has seems to close down defenders and not give them much space to operate.

One of his Alvarez’s main strength lies in their positioning inside his box and finishing. Alvarez takes up positions that make him invisible to defenders and has lightening quick reactions to finish the ball into the net.

In modern football, playing with your back to goal – a somewhat vague concept a few years ago, is important as coaches have re-distributed the onus of scoring goals only from a forward to the wingers. So strikers have been asked in whatever capacity they can to take part in building up play. The 21-year-old has demonstrated ability in this field and with a good coach he can work on this strength.

Weaknesses/Areas to improve for Alvarez

Rather than to classify this as a weakness, I believe that the South American youngster will need a bit of time to transition from Uruguay to Italy. Simply because the Italian leagues and Europe in general offer way more pressing and less amount of space. This would mean Alvarez would need to make decisions quicker and operate well against teams that play a deeper defense or even a higher press

Standing at 5ft 11, the former Penarol man is not a physically imposing centre-forward. This would mean that he would need to use his movements and his strengths differently against opposition defenders and be more agile especially in set pieces.

Will Agustin Alvarez be a good signing for Sassuolo?

For €13 million Sassuolo have got a back-up plan in case they lose Scamcca this season. Alvarez at the age of 21 is still, according to coaches, a mouldable player. But fans of Sassuolo and Serie A in general may need to wait to see the true potential of Alvarez in Italy.

Psychologically, Alvarez has proven he can come through in the big games and his hat-trick against Corinthians proves he is a clutch player. Sassuolo have another potential gem on their hands.