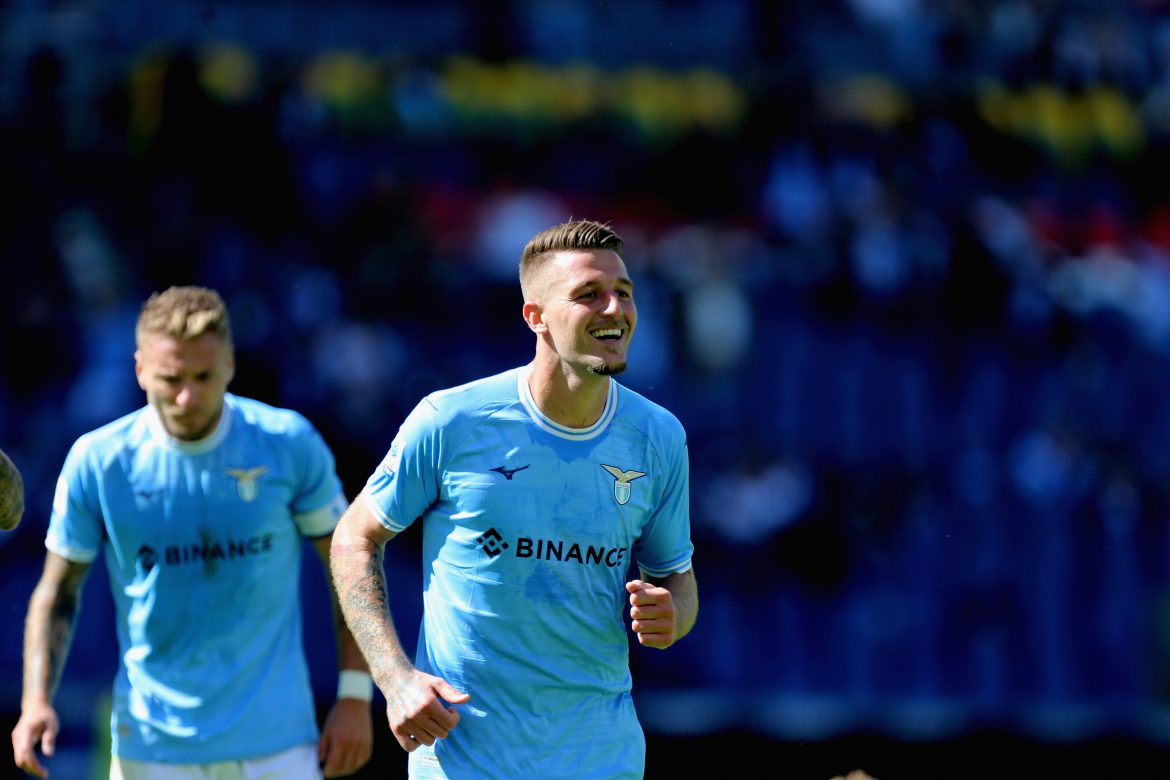 Lazio cruised to a 4-0 victory versus Spezia at the Stadio Olimpico with goals from Mattia Zaccagni, Alessio Romagnoli and a brace by Sergej Milinkovic-Savic. The Roman side continued where they left off prior to the international break and have won three straight matches for the first time in Serie A under Lazio manager, Maurizio Sarri.

It was a complete performance from the Biancocelesti, who dominated from start to end as they provided minimal time and space for Spezia to create chances. Lazio held a greater advantage in possession (61.2% – 38.8%), had more shots on target (6-2) and create more chances in the final third.

One area where the Biancocelesti have vastly improved under Sarri this season has been on the defensive end. Last year, in their first ten games in the Serie A, they conceded 15 goals and earned one clean sheet. It’s been a better start to this season as they’ve earned four clean sheets and conceded five goals in eight Serie A matches.

Lazio’s improvements at the back have been partially due to the signings of several defensive players in the past summer transfer market. Alessio Romagnoli, Mario Gila and Nicolo Casale have put forth quality performances this year.

The backline for Lazio has shown greater awareness, they’ve been more organized and Romangoli has been vocal with his teammates to keep everyone focused. He has provided stability, leadership and experience to Lazio’s backline. It was a memorable match for the Italian as he scored his first goal with his home town club. Romagnoli signed with Lazio this summer as he’s stated that he always wanted to play for the club he idolized growing up.

“It was nice. It was time I scored because I had had several chances. We did well, a very good match that wasn’t easy especially in the second half. We deserved it.” Romangoli said to Sky Sport.

“Did my kiss on the shirt make children dream? I made children like me dream when I was little, I hope that one day they too can do this,” Romagnoli stated to Lazio Style Channel about scoring for the team he grew up loving.

Romagnoli finished the match with one goal, two blocked shots, one interception and had the most clearances with eight. It was a stellar outing from the Italian center-back.

Sergej Milinkovic-Savic reached another milestone for Lazio as he scored his 50th and 51st Serie A goals. He has been a key element of Lazio’s midfield and continues to step up for his side. He was impactful in the midfield as he won several challenges, made timely passes and clinical in the final third. Milinkovic-Savic finished the match with a brace, two successful dribbles, two fouls won, one key pass and won the most aerial duels with six.

In addition, Milinkovic-Savic and Manchester City midfielder, Kevin De Bruyne, are the only two midfielders in Europe’s top five leagues with at least 20 goals and 20 assists in the last three seasons (Stat via Opta). Milinkovic-Savic has contributed to 22 goals and 25 assists in Serie A since 2020/21. He been a key component to Lazio’s midfield and continues to show he’s amongst one of the best in his position.