SERIE A SEASON PREVIEW | Can Lazio reach another level under Maurizio Sarri? 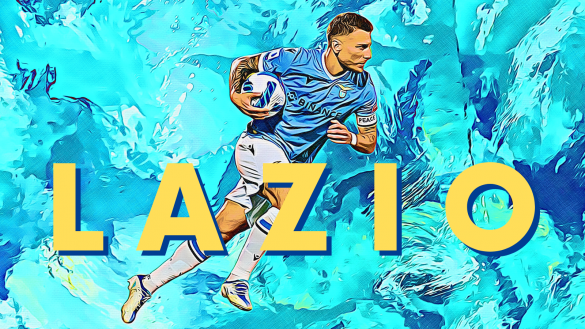 With Lazio set to start their season on Sunday, Jerry Mancini looks at how the Roman outfit can fare in Maurizio Sarri’s second season at the helm.

Lazio ended the 2020/21 Serie A season with a 6th-placed finish. As a result, they failed to qualify for the Champions League for successive seasons and returned to the Europa League. The 2021/22 Serie A season had similar results as the Biancocelesti experienced their share of ups and downs.

Change was on the horizon at the start of the 2021/22 Serie A season as Simone Inzaghi left the club last summer to join Inter after six seasons as manager of Lazio. Maurizio Sarri was appointed as his replacement and a new era began for the club.

The Biancocelesti finished the 2021/22 season in 5th place and in doing so, qualified for the Europa League for a second straight season.

Patience and time was needed for Lazio with the change of managers. A new philosophy and formation were put in place, which meant players needed to adapt to a new style of play. Certain players struggled throughout the course of the year, however, Sergej Milinkovic-Savic had his best season under Sarri as he finished the Serie A campaign with 11 goals and 11 assists. Meanwhile, Ciro Immobile proved he could play in the 4-3-3 and was their leading man once again with 27 goals in Serie A.

It has been an eventful summer for Lazio as they have made drastic changes to their squad. With 2021/22 being a mediocre season, can Lazio turn it around and return to the Champions League?

Lazio’s Sporting Director, Igli Tare, has been active in the summer transfer market by acquiring new players. However, unlike previous seasons, the Biancocelesti proceeded with their signings relatively earlier and were not scrambling in the final hours to make significant moves to improve the squad.

Lazio signed centre-backs, Alessio Romagnoli, Mario Gila and Nicolo Casale. The backline has been an area of concern in recent seasons and, with these signings, is a position that could vastly improve. Romagnoli is expected to be the lead man in the backend yet Gila has been the standout performer during preseason. After struggling to earn playing time with Real Madrid, he now has the opportunity to prove himself.

Pepe Reina and Thomas Strakosha both departed this summer as the former mutually agreed with Lazio to terminate his contract, while the latter’s contract had expired. This was an area that needed to addressed and Lazio signed Luis Maximiano from Granada and Ivan Provedel from Spezia. Maximiano is a young goalkeeper who’s expected to have upside while Provedel has Serie A experience and now has the opportunity to compete at a higher level.

Lazio have signed several midfielders, which should provide some needed depth that was lacking last season. Marcos Antonio has been a standout in preseason and it is presumed that he will take over the role of Lucas Leiva, who left last Lazio this summer as his contract expired. In addition, Matias Vecino arrived on a free transfer.

Lastly, they signed 20-year-old, Matteo Cancellieri, who has been highly regarded in Serie A. The Italian primarily plays at right-wing yet could be a possible candidate to be a backup to Immobile. Cancellieri is a versatile player which should provide pace and skill upfront.

While Lazio have managed to sign players, they have offloaded several as well. Vedat Muriqi, Denis Vavro, Gonzalo Escalante and Jony are notable players who have either been sold or loaned out. The club has made key sales which has helped them to buy several marquee players.

Although Lazio have been busy in the transfer market, players such as Immobile and Milinkovic-Savic are set to stay for another season. The latter has often been rumored to be leaving Lazio however retaining their key players will be important this season. The status of Luis Alberto and Francesco Acerbi remains uncertain, as both players have requested to leave yet no suitable offer has arrived.

It has been an encouraging and positive transfer market for Lazio and it remains to be seen if further moves will be made.

The number one priority that was completed this summer was the contract extension of Maurizio Sarri. He will remain with Lazio until 2025 and enters his second season as manager of the Biancocelesti. Committing to Sarri meant that Lazio remain ambitious and aim to stay near the top of the table.

Sarri’s first season with Lazio had its ups and downs. The club played fluid and brilliant football where they were one of most attack minded teams in Serie A. However, on the defensive end, far too often they would concede poor goals which led to several points being dropped.

Sarri brings a wealth of experience as, in previous years, he’s managed clubs such as Napoli, Chelsea and Juventus. In doing so, he’s won the Europa League with Chelsea and a Scudetto with Juventus.

There was a shift in Sarri’s first year as he introduced a new philosophy to Lazio and required them to transition from the 3-5-2 to the 4-3-3. He is known to have an exciting brand of football that is attack-minded and involves quick one-touch passing.

This upcoming campaign, Lazio will aim to further progress under Sarri. The club has been active this transfer market and addressed several positions early so Sarri had ample time to work with them during preseason. Lazio has been one of the most active teams in transfer market, showing a commitment to their manager. In addition, they retained marquee players.

So far, Lazio has done a decent job acquiring players such as Marcos Antonio, Provedel, Vecino, Romagnoli and Cancellieri, who have the right characteristics and provide options for the coach. With the addition of new players and current players such as Immobile and Milinkovic Savic returning, the coach will have a competitive squad.

Player to watch for Lazio

In the past seasons, Lazio have depended on Immobile for his scoring yet a player to watch out for this season is Milinkovic-Savic. Last season, the Serbian proved to be vital in the midfield as Lucas Leiva and Alberto struggled to adapt to Sarri’s system. In addition, both players missed parts of the season due to injuries and illness.

The 2021/22 Serie A campaign was Milinkovic-Savic’s best season with Lazio as he finished with 11 goals and 11 assists. He ranked first on the team for assists and appeared in 47 games across all competitions, playing over 3700 minutes. The Serbian ranked first in aerial dues won with 2.8 and ranked third in dribbles with 1.2 per game.

Milinkovic-Savic was effective at both ends of the pitch where he scored key goals and made decisive challenges to prevent teams from scoring.

Last season, Milinkovic-Savic made a significant leap and proved that he was able to adapt to Sarri’s system. The Serbian will aim to take his game to another level this season. Based on Sarri’s preferred style for his team to be quick, retain ball possession and make short passes, expect Savic to be heavily relied once again this season.

After a mediocre campaign in 2021/22, the club will aim for better results and to finish further up the standings. They finished in 5th place and managed to qualify for the Europa League.

Lazio exited early in the Europa League last season and will hope for a better fate this time around. The Coppa Italia also didn’t fare well as they dropped out in the quarter-finals for a third straight season.

While Lazio will not be competing for the first three spots this season, they will be able to play for the last spot into Champions league. Expect the club to finish in between 4th place to 6th place.

However, with the transfer market still open until the end of August, what teams decide to do until then could change the outlook of how Lazio will finish this season.

Paulo Dybala expected to start for Roma in Serie A opener