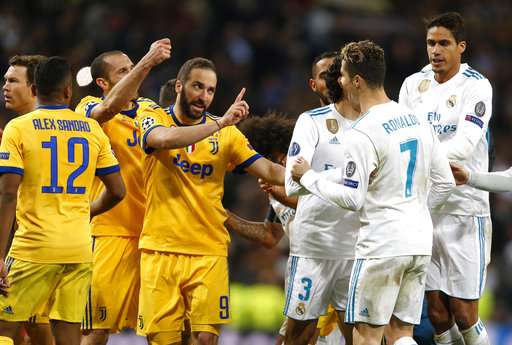 Juventus are officially out of the UEFA Champions League after falling to Real Madrid 4-3 on aggregate.

Juventus managed a sensational comeback in Madrid, reminiscent of Roma last night, only to fall short in the final seconds.

The Croatian then scored a second header in the 37th minute off a cross from Stephan Lichtsteiner.

Juventus found the vital third goal practically gifted to them in the 60th minute as Keylor Navas fumbled Douglas Costa’s cross directly into the path of Blaise Matuidi for a tap-in.

With the aggregate completely even and the match set for extra time, a furious final minute ensued.

In the final minute of stoppage time, Ronaldo headed down a cross towards Lucas Vazquez and as Mehdi Benatia tried to prevent a shot from close range was deemed to have committed a foul by referee Michael Oliver and Real Madrid was awarded a penalty.

Juventus captain Gianluigi Buffon was livid and was shown a red card after furiously protesting. Wojciech Szczesny was subbed in but it made no difference as Ronaldo’s penalty was perfectly taken into the upper corner to send Real Madrid into the semi-finals of the Champions League.

“I know the referee saw what he saw, but it was certainly a dubious incident. Not clear-cut. And a dubious incident at the 93rd minute when we had a clear penalty denied in the first leg, you cannot award that at this point,” Gianluigi Buffon told Mediaset Premium after the match. “The team gave it’s all, but a human being cannot destroy dreams like that at the end of an extraordinary comeback on a dubious situation.”

The 40-year-old who may have just played his last Champions League match but offered graceful comments as always, “Real Madrid deserved to go through over the two legs, I wish them the best and it has always been an honor for me to face this club, but objectively we at least deserved to go to extra time tonight. It disappointed me to leave the boys with 10 men, but I said objectively Real Madrid deserved the victory, we shake their hands and move on.”

After reaching two Champions Leauge finals in the three editions, Juventus bow out in the quarter-finals.