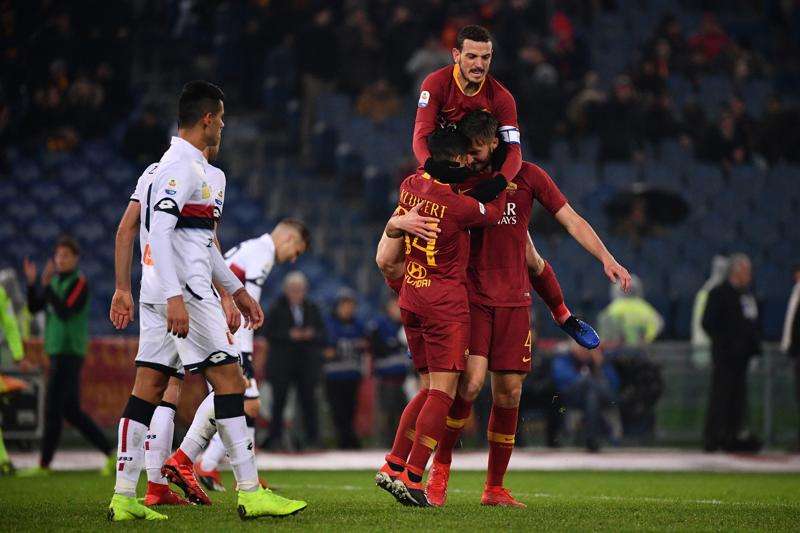 Roma edge out Genoa to save Di Francesco

Roma came from behind twice on Sunday night to beat Genoa 3-2 and ease some of the pressure on manager, Eusebio Di Francesco. Having slipped into the bottom half ahead of the game, this was a must-win match for Roma, but they were made to work hard for their victory.

Without a win in over a month, Roma have looked bereft of confidence in recent games. They got off to a dreadful start here as well, goalkeeper Robin Olsen spilling a long-range effort, allowing Krzysztof Piatek to nudge the ball over the line. Roma needed to respond quickly, and they did. Federico Fazio saw one effort go narrowly wide, before going one better moments later, with his sweetly-struck effort flying into the bottom corner.

Scoring goals has not been a problem for Roma this season, it has been letting them in at the other end that has become a big issue. They were behind again just two minutes after levelling, Oscar Hiljemark finding space at the back post from a corner to volley home. The action for the first half was not over though, as Justin Kluivert gave a glimpse of his quality, running from deep and producing a fine finish from a tight angle into the far corner to restore parity.

Going into the second half, it appeared that Roma’s players had 45 minutes to save their manager’s job. It seemed that the task may be beyond them when Cengiz Under blazed his shot over from inside the area with the goal at his mercy. Yet Roma refused to be denied, and went ahead for the first time, Bryan Cristante firing home following an exchange with Kluivert. Cristante could have had his second and Roma’s fourth in the closing stages, only to see his effort rattle against the post with the goalkeeper well beaten.

This set up a tense finish, but Roma held on to secure a vital win. They have moved up to 7th, and will hope that this is an important step towards their push for a top-four spot. Genoa remain winless since September, leaving them in 16th place.

A Cristiano Ronaldo penalty secured all three points in the Turin derby, as Juventus won 1-0 at Torino. The champions were some way off their best and had to rely on a defensive mix-up to take the spoils. Simone Zaza’s under-hit backpass allowed Mario Mandzukic to intercept ahead of Salvador Ichazo, who brought him down with a rash challenge. Ronaldo’s spot-kick ensured that Juventus stay on course for another title, having accumulated 46 points from their 16 matches.

Inter Milan also required a penalty to defeat Udinese 1-0. Udinese’s resilience was finally ended in unfortunate circumstances, Seko Fofana giving away a soft penalty by misjudging a headed clearance and instead handled the ball. Mauro Icardi coolly dinked home the resulting penalty, as Inter’s difficult week finished on a high.

Arkadiusz Milik produced a stunning stoppage time free-kick to earn Napoli a 1-0 triumph over Cagliari. It had looked as though Napoli were to be left frustrated, with Cagliari proving a tough side to break down. However, Milik stepped up late on to curl home an unstoppable shot, which keeps Napoli in second place, six points clear of Inter Milan.

Atalanta held off Lazio, claiming a 1-0 win, with VAR coming to their rescue in added time. Duvan Zapata’s first-minute goal was enough to lift Atalanta to sixth, although they received a scare in the dying minutes when Francesco Acerbi thought that he had scored the equaliser, only to have his header chalked off due to being fractionally offside.

Longo out, Baroni in

Frosinone have sacked their manager, Moreno Longo, after suffering a 2-0 defeat at home to Sassuolo. With only one win all season, Frosinone look to be heading straight back down to Serie B, and they were soundly beaten on Sunday afternoon. Lorenzo Ariaudo’s own goal broke the deadlock before Domenico Berardi wrapped up the game inside an hour. Longo’s replacement will be Marco Baroni, the man that steered Benevento to an unlikely promotion into the top flight in 2017.

Fiorentina won for the first time since late September to move into the top half of the table, earning a 3-1 victory against Empoli. They fell behind to a Rade Krunic goal, but battled back impressively, with Kevin Mirallas, Giovanni Simeone and Bryan Dabo getting on the scoresheet.

Two goals in three minutes was enough to hand Sampdoria a 2-0 win over Parma in Genoa. The hosts controlled the game from the start, yet had to wait until midway through the second half to take the lead through Gianluca Caprari. They doubled their advantage thanks to Fabio Quagliarella, meaning Sampdoria move up to 9th, with Parma slipping down to 12th.

AC Milan were held to the second successive 0-0 draw, this time by relegation-threatened Bologna. Despite dominating possession, Milan were unable to find the net and had Tiemoue Bakayoko sent off in the second half. Milan remain in fourth, but face a midfield crisis on Saturday against Fiorentina, with Bakayoko and Franck Kessie suspended, whilst Lucas Biglia and Giacomo Bonaventura are sidelined with long-term injuries.

SPAL and Chievo played out a 0-0 draw in a result that did very little to help Chievo’s slim chances of avoiding the drop. Domenico Di Carlo has managed four consecutive draws since taking over to add to the one that Gian Piero Ventura earned prior to his departure. This still leaves Chievo on just four points, nine adrift of safety.