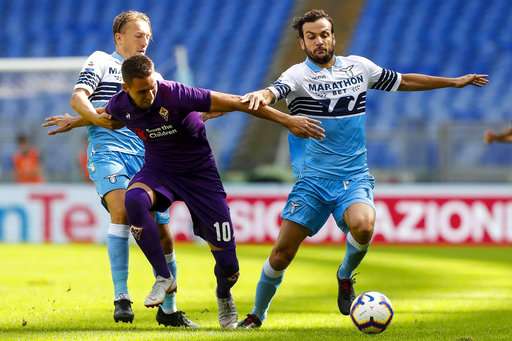 Inter Milan moved up to third in the Serie A standings with a hard-fought 2-1 win away at SPAL. Not for the first time, they had their captain to thank for the three points.

Luciano Spalletti opted to make a number of changes from the team that was victorious in midweek against PSV Eindhoven. The visitors were into their stride quickly though, and one of the players to come in, Keita, was involved in the opening goal. His shot was well-blocked, but Inter were able to recycle possession, culminating in Mauro Icardi sneaking ahead of his man at the near post to head home via a deflection. It appeared that a routine win was on the cards.

Yet SPAL urged on by their passionate fans, were not about to lie down. They worked their way back into the contest and were given a golden opportunity to level matters. Moments after Samir Handanovic had pulled off a diving save, Joao Miranda undid his keeper’s fine work by clumsily giving away a spot-kick. Mirco Antenucci stepped up, but dragged his penalty a yard wide of the post. Both sides had further chances in an entertaining first period, with Keita wasting the best of the lot, as he somehow managed to misplace his square pass to Icardi who had the goal at his mercy.

Into the second half, and SPAL were still creating openings. Antenucci could not get enough on a close-range header, whilst Andrea Petagna fluffed his lines from six yards. The home team were gathering momentum, and deservedly got the equaliser with just under twenty minutes remaining. Mohamed Salim Fares drilled a cross in which skidded off the shin of an Inter defender and into the six-yard box. Handanovic was slow to move his feet, allowing the unmarked Alberto Paloschi to drift in and tap home.

When Inter are in trouble, they often look to Icardi to produce the goods. They needed him again here. He delivered. The Argentine talisman lives off defensive lapses in concentration, and with the SPAL defence all over the place, he found space to receive Ivan Perisic’s pass and slot past the onrushing keeper. Some nervy moments were to follow, but Inter held strong and secured their fourth straight league win. Meanwhile, SPAL have now suffered four losses on the bounce, leaving them 14th in the table going into the international break.

Juventus maintained their six-point lead at the top of Serie A with a convincing 2-0 triumph over Udinese. The champions have come under increased scrutiny in recent days over their handling of matters off the pitch. Their CEO, Giuseppe Marotta, left his position last weekend after an apparent difference of opinion with club president, Andrea Agnelli, whilst a bigger issue has arisen this week with the reopening of a case involving Cristiano Ronaldo. The forward is faced with a rape allegation dating back to 2009; he denies the accusation. On the pitch, Ronaldo was back in the starting line-up having served his European suspension in midweek, and he scored his fourth goal of the season to add to Rodrigo Bentancur’s close-range header. Eight wins from eight for the Bianconeri.

Napoli and Roma backed up their Champions League victories with 2-0 defeats of Sassuolo and Empoli respectively. Lorenzo Insigne, the match-winner against Liverpool on Wednesday, was on target again here as Napoli consolidated their second place position. Roma did not have things all their own way but scored late in both halves to take maximum points back to the capital. Steven N’Zonzi and Edin Dzeko were the scorers in this one.

Lazio returned to winning ways, beating Fiorentina 1-0 at the Stadio Olimpico. Simone Inzaghi needed a response from his side after Thursday night’s horror show in Frankfurt. He got it. The hosts put in a much improved defensive display and earned victory through a Ciro Immobile strike shortly before the break.

Parma scored three times in fifteen minutes to storm past Genoa 3-1 in Sunday’s lunchtime kick-off. They had fallen behind; Krzysztof Piatek doing the damage once again to take his account to eight for the season already. However, goals from Luca Rigoni, Luca Siligardi and Fabio Ceravolo, all inside the opening half hour, stunned Genoa who had no response. Roberto D’Aversa’s team have now moved into the top half of the table.

Frosinone’s battling display yielded no points, as they lost out 3-2 to Torino in a Friday night thriller. Torino appeared in control at 2-0 up, but Frosinone levelled the scoreline with goals from Edoardo Goldaniga and Camillo Ciano. A stunning Alex Berenguer effort settled the game though, condemning Frosinone to a sixth successive defeat.

AC Milan proved far too strong for bottom side Chievo, recording a 3-1 home win. Gonzalo Higuain continued his fine start to life at the club, netting twice in the first half. Giacomo Bonaventura put the game beyond doubt, before Sergio Pellissier, making a rare start at the age of 39, pulled one back for the visitors.

Cagliari claimed their first victory since early September as they saw off Bologna 2-0. Joao Pedro and Leonardo Pavoletti scored midway through each half, in a result that saw Cagliari leapfrog their opponents in the standings. Bologna have dropped to 16th, just two points above the drop zone.

Sampdoria ensured that Atalanta’s nightmare start to the season continued, inflicting a 1-0 defeat on the side from Bergamo. Atalanta were guilty of careless finishing throughout the game and were punished by a well-placed Lorenzo Tonelli header in the second half. Without a win since the opening day, Atalanta are only a point clear of the bottom three heading into a much-needed two-week break for Gian Piero Gasperini’s men.

Riza Durmisi sidelined for a month