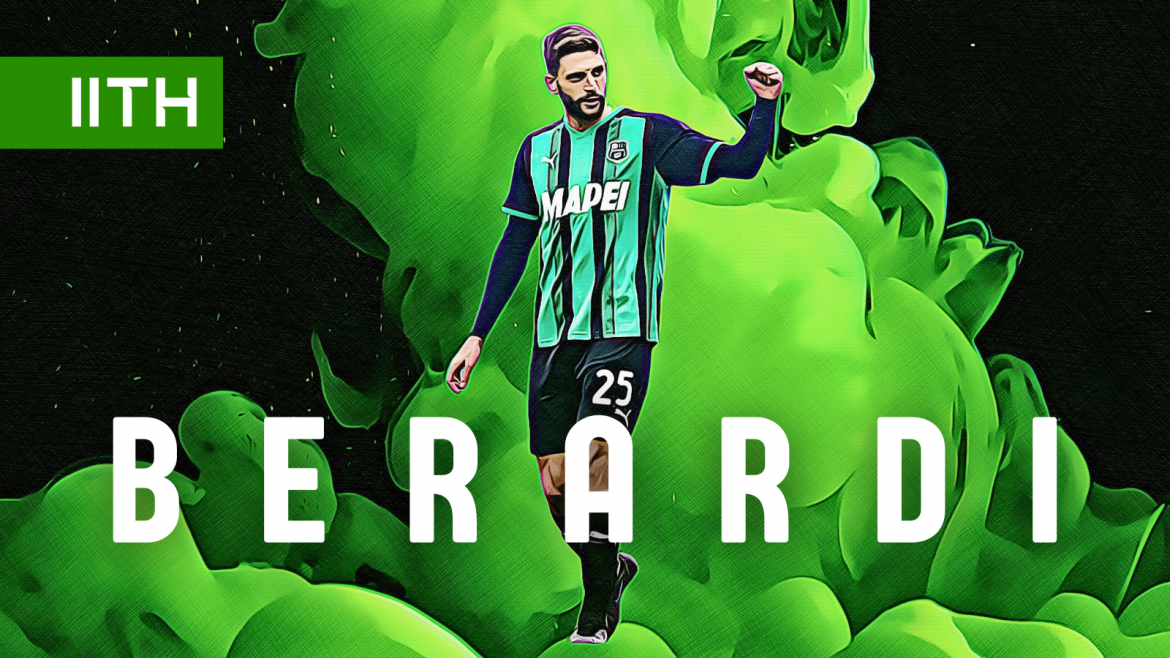 Not everyone makes it to the professional level. While on his journey to meet his brother Francesco in Modena in 2009, Domenico Berardi might have felt the same. Born in Cariati Marina, a young Berardi started learning the ABC of ‘Calcio’ at an early age in the school of Cosenza del Castell. But he was unaware of whether he could ever fulfil his dreams of making it big in Italy. But the visit to Emilia changed everything in the career of the 13-year-old.

When playing a friendly match, Berardi, brimming with the courage of a cub, caught the attention of one of his brother’s friends, who reached out to Luciano Carlino and urged him to try out this kid. Carlino, an observer of the Sassuolo youth sector, called Berardi for a trial. Sensing the opportunity, the youngster flourished and passed the test with good remarks. Sassuolo came calling for his services, and soon his teammates were the members of Eusebio Di Francesco’s senior side. An 18-year-old led Sassuolo to their first-ever promotion to Serie A, adding the Serie B’s Player of the Year award to his budding trophy cabinet in 2013.

It was a huge step-up in his juvenile career. The growing fame allured the elites of Italy, with Juventus purchasing 50% of the stake in Berardi’s ownership after the player’s stellar season in the second division. But with the Italian Football Federation repealing the co-ownership law in June 2015, Sassuolo were eventually propelled to pay €7.3million to the Old Lady to recover Berardi’s rights entirely.

At one end, Sassuolo kept gambling on the emerging Italian managers. And at the other end, Domenico Berardi kept strengthening his position for the Neroverdi. From starting as a left-winger then to operating as a number 10 and gradually shifting towards the right-wing, the witty dribbler has completed a cycle of developments in different attacking areas of the pitch, somehow helping Sassuolo survive in the top flight over the years and providing Roberto Mancini with a wizard he and the Italian national team could rely on in the years to come.

The provider of the most assists in the 2014–15 Serie A season is leading the respective chart once again—under a new man in Alessio Dionisi, who took over the managerial baton of the Italian club from Roberto De Zerbi last summer after the latter had accepted a job at Shakhtar Donetsk.

Although Berardi has notched up 15 league goals and 14 assists under the management of Dionisi, the natural evaluation of his game took place after De Zerbi came to power. Before De Zebri’s arrival, Berardi was majorly playing as a false nine and a number 10, but De Zebri considered putting him more on the left.

Despite being 6ft tall, the forward shares an unusual relationship with the centre of gravity. A perfect balancing on the ball always supports him to hoist past defensive bodies with utter ease.

His ability and tendency to dribble inside has seen him slowly emerging as an inside forward rather than an out-and-out winger for the Neroverdi. With full-backs giving him the support with their darts down the outside channel and Berardi making swift runs towards the 18-yard-box down the inside route, managers always get the diversity in possession with the aid of the 27-year-old.

Amassing 14 assists and 15 goals, especially when he is the team’s preferred penalty taker, might not seem that fascinating from a neutral point of view. But Berardi’s start to the season was far from hinting at the prospect that the 2021/22 season would turn out to be such a success. He missed his first two games in Serie A due to a leg injury, making his first start for the club against Jose Mourinho’s Roma.

With Mourinho mirroring a frustrating figure on the touchline, Berardi, once compared with Manchester United and Arsenal’s Robin van Persie, registered his first assist. In the next game against Torino, Berardi flopped as Dionisi’s men succumbed to a 1–0 defeat at the hands of Ivan Juric’s Toro. His first goal came in the following encounter against Atalanta. Though, they ended up losing the match.

The master of trickeries had already got the tag of a “big-game player”, and the 2021/22 season saw him doing justice to that title, with Berardi contributing to goals either by scoring them or with an assist against Inter, Juventus, Milan, Napoli, and Lazio in the first half of the season. Seemingly a calm figure with a leader-like demeanour, the Italian has continued to wreak havoc against the so-called “big clubs” in the second part of the campaign as well.

Sassuolo want €30 million from Milan for Domenico Berardi, report Gazzetta di Modena. Milan are willing to add three players in the deal and that includes Daniel Maldini as well.https://t.co/HtkzZJWl6c

For a player, let it be professional or semi-professional, every goal is important, but some remain more important than others. Berardi scored a goal of similar ilk this season against Milan at San Siro. The home side was already 2–1 down on the scoreline as the game had entered a telling moment. A goal could have clearly sent Milan back to the driving seat. But then, Berardi happened.

Being an eager runner down the left, he found himself one-v-one against Milan captain Alessio Romagnoli, the scorer of the opener. Unfazed by the presence of the bulkiest of thighs in front of him, the forward took on the defender and successfully sat him down with a flamboyant drop of the shoulder before nutmegging Mike Maignan to put the game to bed. The goal remains a mark of the player’s excellence to date.

Then, in the penultimate round of the Serie A 2021/22 fixtures, Sassuolo visited Bologna in a match that had little significance to the standings. But, for Berardi devotees, it was another opportunity to gaze at the brilliance of the forward. And that coveted moment arrived at the stroke of the 75th minute, with the protagonist carrying out a successful bicycle kick to hand the visitors a 2–0 lead. It was one of the best from one of the best in the Italian top-flight.

When fit, he has consistently delivered for Sassuolo this season. His longest run without a goal or an assist came from those two weeks where the black and green had played Fiorentina and Bologna on the trot earlier this season.

Other than scoring and assisting in abundance, Berardi has registered 3.3 shots per game (1.5 shots on target), 2.5 key passes per match, and 29.4 passes on an average (with an accuracy ratio of 75 per cent). The statistics from Opta Sports further demonstrate that the cunning runner has a flawless penalty conversion rate in the league, with Berardi converting six out of six penalties taken this season. In terms of dribbling, he has maintained an accuracy of 45 per cent and drawn 2.3 fouls on average, which somehow helps a team win free-kicks and ostensibly an opportunity to score more goals.

But despite being rigidly consistent, he has somewhat gone under the radar, especially in the eyes of the fans preferring collective conquest over individual success. According to the ratings of Opta, Berardi is the best player in Serie A for the 2021/22 season. But if you state the same in public, you will be laughed at more often than not, stressing the point further that a player needs to win silverware before getting the praise he deserves.

Unfortunately, Berardi’s form has not echoed that of Sassuolo, with the representatives of the smallest Italian town in Serie A dropping points like a team lacking European ambitions. And that has resulted in a certain portion of enthusiasts disregarding Berardi’s overall contribution this season. But he is not overlooked by his close admirers, with the Cariati-born continuously linked with a summer move to Milan.

Berard’s story at Sassuolo has been nothing short of a fairytale, where the protagonist becomes a star from the scratch, the synopsis of every success story. Beradi’s mind-boggling displays in the summer’s European Championship have already placed him under the notice of the globe, which is certain to widen over time. The 2021/22 season has just made the way much easier for the star.

Every ship needs a captain. A successful voyage leads the captain to receive a heap of praise. No one does the same for the man keeping tabs on the water with a pair of binoculars atop the deck. Sassuolo’s Berardi this season has become akin to the sailor at the top. Without him on duty, Sassuolo was bound to endure the same fate as the Titanic in 1912.