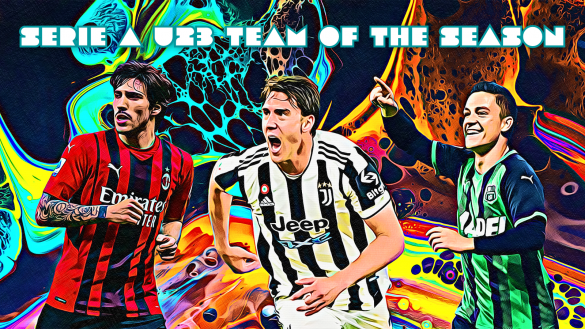 There has been a distinct lack of Under-23s goalkeeper in Serie A this season, especially with Bartlomiej Dragowski having turned 24 already. As a result, Pandur, who has made three appearances for Verona this season, makes the cut.

Pandur had joined the Gialloblu back in the summer of 2020 and he has made 11 appearances since then. Igor Tudor used the Croatian in a couple of Coppa Italia games as well, as Verona bowed out in the second round of the competition.

While Lorenzo Montipo has been the guaranteed starter for the club, the Italian’s absence due to COVID-19 back in January had handed a chance for Pandur to shine. Even though Verona won only once in the three games that he has played in the campaign, Pandur could well be a solid deputy option and could prove to be a regular in the future.

Singo’s rise at Torino has been rather unprecedented, considering how he arrived from Ivorian club Denguele and made an impact as a teenager in his first season in Serie A. It is this season that his performances have really picked up to a point where a lot of clubs in Italy and abroad are looking at him.

Singo has made 35 Serie A appearances while contributing to seven goals under Ivan Juric, whose emphasis on a high-energy and attacking brand of football has improved the Ivorian as a player. Il Toro’s usual 3-4-2-1 shape has also suited him, allowing the wing-back to constantly bombard up and down the pitch on the right.

A bit like Singo, Kalulu’s rise at the Rossoneri has also been unexpected. Having arrived a free agent in 2020 and someone who was not expected to play as often as he has, Kalulu has become a vital defender for the player after having been seen as a bit-part option.

Following the exclusions of the likes of Alessio Romagnoli and Simon Kjaer, Stefano Pioli drafted Kalulu into a regular centre-back role. There was even a period when Fikayo Tomori was out, leaving Kalulu to form a pairing with Matteo Gabbia. And the Frenchman came out with flying colours, holding his own at the back and helping Milan pick up vital wins.

Reminder that Pierre Kalulu may know how to do everything on a football pitch.pic.twitter.com/NdMjpZWAQ4

His goal against Empoli proved crucial, helping the Rossoneri to an all-important 1-0 win. Kalulu has now become the club’s regular centre-back, proving to be a fitting example of how Milan are challenging for the Scudetto without spending big money.

Even though Alessandro Bastoni’s start to the season was rather slow, his form picked up as the season went on. Inter have had spells of inconsistency in the second half of the season but Bastoni has still had quite a decent season for the Nerazzurri.

He played 29 Serie A games in the campaign, playing more of a structured role under Simone Inzaghi than he did under Antonio Conte. His ability to pick a pass while building from the back and carrying the ball has always been a vital trait. Under Conte, Bastoni had more of a license to go forward but that hasn’t quite been the case under Inzaghi.

Aaron Hickey’s contention had to come past competition from Udinese’s Destiny Udogie, who has also done quite well for the Friuli-based side. While both of them can earn big moves in the summer, Hickey’s impressive campaign has come at the back of a highly-talked about move from Hearts back in 2020. He had an injury prone campaign last year but he has proved his mettle soundly under Sinisa Mihajlovic this season.

Having scored five goals for the Rossoblu, Hickey has formed the core of quite a young and multi-cultured side at Bologna. He has played at left-back and at left wing-back, but has also played equally well at right-back and right wing-back. The ex-Celtic youngster has impressed in a host of big games, acquiring the sort of consistency which he was known for at Tynecastle.

With Franck Kessie not having had the best of seasons and Ismael Bennacer not having had a consistent spell in the team, Milan needed Sandro Tonali to be as good as he has been. He has grabbed crucial goals against Verona and Lazio recently but that part of his performances has been rather secondary.

It has been one of those seasons where Tonali has essentially destroyed the myth about him being an Andrea Pirlo-prototype, showing that his profile is closer to a certain Rino Gattuso. To many, he was always more of a Gattuso than a Pirlo.

The 22-year-old’s performances against Fiorentina, Bologna, Empoli, Atalanta and Torino are only a testament to how good a season this has been and it could well be the real coming of age of the midfielder in Serie A.

Like Hickey and Theate, Svanberg is also a representation of Bologna’s fine, multi-cultural approach to scouting players that other Italian clubs have been trying to copy. The ex-Malmo youngster has contributed to six goals from midfield in 35 appearances, while also showing how technically gifted he is on the ball.

Even though there is a lot that Svanberg can furnish in his game, the Swede has shown a wide range of abilities on the pitch – pretty much suiting how Mihajlovic wants his teams to have different shapes in different phases of play. The 23-year-old is good at playing between the lines and while still raw, it is easy to see why the likes of Tottenham and Manchester City have drawn links with him.

This has, by far, been Svanberg’s best season at Bologna in Serie A and considering his contract situation, it will not be a surprise to see him join a bigger club in the summer.

Giacomo Raspadori’s talents were well known last season too, but the young Italian has lived up to the hype this season. The 22-year-old has scored ten times, also getting six assists for the Neroverdi and it is much better than his return of six goals and three assists last season.

Linked heavily with Juventus, Raspadori has generally played just behind Gianluca Scamacca but has also shown an equal capability of playing out wide or upfront by himself. Almost like a Wayne Rooney stuck in a Sergio Aguero-like physique, Raspadori’s technical ability on the ball fits how Alessio Dionisi’s side play and his ability to turn and make the right decisions in the final third is really impressive.

Juventus are edging closer to signing Giacomo Raspadori as a replacement for Paulo Dybala, report @Gazzetta_it. Personal terms won't be a problem and the player has the same agent as Andrea Pirlo.https://t.co/mBpLO8xMPQ

There have been calls for the 22-year-old to play more often for Italy and considering Gli Azzurri’s inability to qualify for the World Cup again, the time may be right to hand Raspadori a regular spot in the team.

Even though Hamed Traore is generally a left-winger for the neroverdi, the distinct lack of right-wingers in the Under-23s category in Serie A makes him a candidate for the slot on the right.

The Ivorian really took off following the departure of Jeremie Boga to Atalanta and he has racked up seven goals and four assists for Sassuolo this season. His season had kicked off with a goal against Verona but it was only February onwards that the 22-year-old caught the eyes of clubs like Juventus and Napoli.

A voracious dribbler of the ball and blessed with a final pass as well, Hamed is equally pro-active off the ball too. He has replaced Boga perfectly and it will not be a surprise to see him follow out the Chelsea youth graduate away from Sassuolo.

Picking Under-23s strikers in Serie A will surely leave you spoilt for choice. From Scamacca and Victor Osimhen to Andrea Pinamonti and Dusan Vlahovic, it is just not easy to make a choice.

But despite a slightly dry run under Max Allegri recently, Vlahovic has 23 goals in Serie A this season – more than all the other candidates. It doesn’t mean that the Serbian puts other names in the shade, as the likes of Scamacca, Osimhen and Pinamonti have been equally impressive. But a change in system mid-season for Vlahovic has meant that he has had to adapt to a completely different approach than what Vincenzo Italiano’s Fiorentina had.

An argument can be made of the fact that staying at the Artemio Franchi could have boosted Vlahovic’s numbers further. Even if the time at Juve hasn’t been great, he has a solid goalscoring tally of 0.54. That stood at a brilliant 0.82 in the first half of the campaign.

Any Serie A Under-23s Team of the Season will be incomplete without the mercurial Rafael Leao. The Portuguese has delivered when Milan have needed goals and his improvement from last season has witnessed his goals tally go from six to ten. While goals and assists can only suggest so much, the ex-Lille man ranks 94 percentile for dribbles completed and 89 percentile for progressive carries on the pitch.

FBRef suggests that Leao is as high as 98 percentile for shot-creation actions, suggestive of how he has evolved into a player who isn’t just a dribbler but a reliable creator as well.

His performances have been especially vital in the second half of the campaign, as he has come up with vital contributions against Roma, Sampdoria, Udinese, Genoa and he grabbed a vital winner against Fiorentina too. If Milan end up winning the league, Leao will have a key role to play in that.